Mysterious Structures of the Gobi Desert 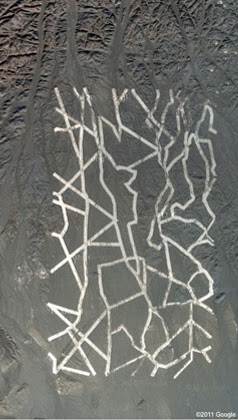 If you like puzzling over the meaning of the Nazca lines in southern Peru, crop circles in central England or poring over maps of Area 51, then you'll like this.
Digital mapping fans have been noticing some unusual forms by using Google Earth in China's vast stretches of barren wastes in the Gobi desert.
The bizarre shapes vary widely. Two of them are grids that look like street floor plans without buildings and are around 2 kilometers long by over a kilometer wide.
One of the other formations looks tantalizingly like Stonehenge from a great height.  Zooming in reveals three aircraft sitting at it's heart.  Some Japanese researchers believe it may be used to give China's spacecraft a frame of reference, possibly testing a quantum key distribution system between the spacecraft and satellite.
Could a ground-to-space system need some kind of elaborate ground sight?
Another theory is its some kind of military target for airstrike or gunnery practice. Possibly a target practice range for the People's Liberation Army. 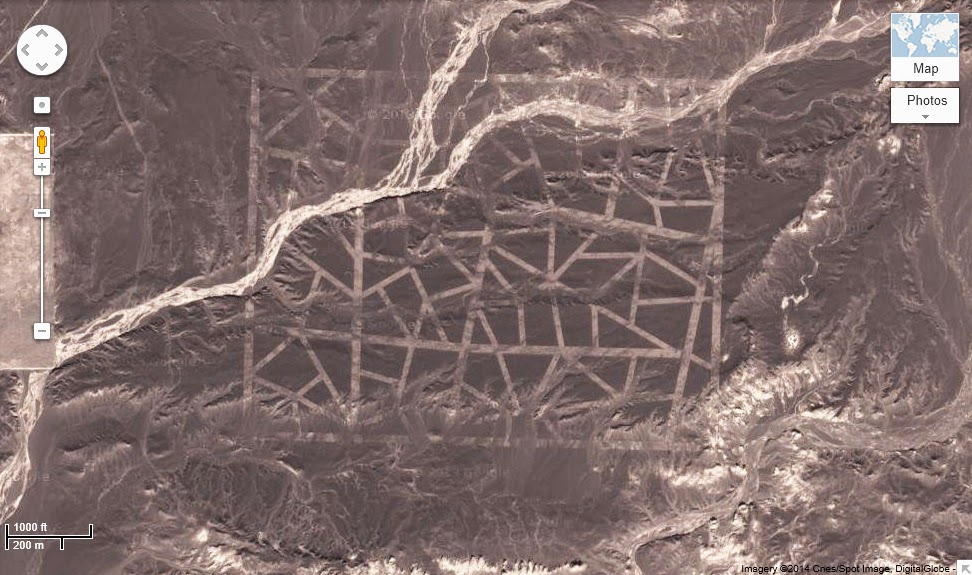 While the majority of these unusual formations and grid-like patterns appear to have been constructed in recent times, there are numerous structures across the Gobi desert which are likely many thousands of years old, including massive pyramids.  These enormous Chinese pyramids are similar to the pyramids of Giza in size, alignment and orientation.

Some people have speculated that some of these structures being discovered are actually the visible surface remains of a lost civilization that retreated underground in ancient times.

According to Buddhist doctrine, Agharta is a subterranean paradise located deep within the crust of our Earth inhabited by millions of people. Entrances to this underground realm are said to exist in several parts of the world, and China is one of them. 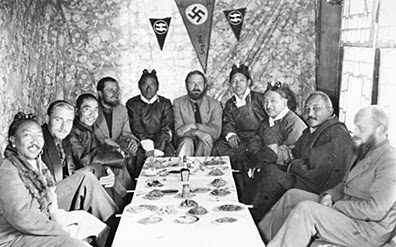 Many peoples of various different ethnicities, cultures and religions, have strongly believed in races that inhabit a world within our world. Nazi Germany shared the conclusion that the 'lost' civilization of Atlantis was real, and lives on beneath the Earth's surface, including under Tibet.
At first sight, it might seem strange that the architects of the Third Reich would be interested in a region that many consider to be the spiritual center of the world; until, that is, we remember that, according to Thulean mythology, this center was once the Aryan homeland in the Arctic, and was displaced with the fall of Atlantis around 10,800 BC.
This dismissed theory becomes more interesting since the 1990's with the discovery of hundreds of tall, blond, 4,000 year old mummies adorned in swastikas in the Gobi desert over 40 years after the fall of Nazi Germany.

In March 1935 Cayce referred to a city buried under the sands of the Gobi and in 1936 he called this city the "City of Gold." He also stated that this city would probably be discovered in the future. One characteristic of the Gobi civilization was the implementation of a social structure apparently much like the Mississippian Era mound builders had. The rulers were held in high esteem and lived in temples. Cayce referred to terraced buildings and temples in the Gobi.


A group from the Gobi was identified as having DNA bearing the "X" Haplotype in 2001. This group may be related to the Atlantean Genetic type and the Basques. So is the story of Agharta nothing more than fable, or could there be truth behind the legends? Could an inhabited subterranean world really exist?
How I Found the Lost Atlantis, The Source of All Civilization
Posted by Atlantean Gardens at 7:37 AM