Source: YourNewsWire
Vladimir Putin has banned Jacob Rothschild and his New World Order banking cartel family from entering Russian territory “under any circumstances." He recently reminded his cabinet that he paid off the Rothschild’s debt and “grabbed them by the scruff of the neck and kicked them out Russia’s back door.”

This meeting featured the Russian President pounding his fist on the table and vowing to destroy the New World Order, and according to a Kremlin source Putin is making great strides towards this goal. “They do not own the world, and they do not have carte blanch to do whatever they want. If we do not challenge them there will be other issues. We will not be bullied by them.” 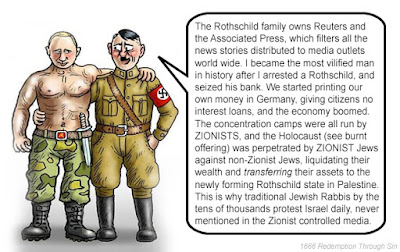 It is understood that the Rothschild banking racket was a noose tied around the neck of the Russian economy. Once the knot was tightened, the economy would struggle and choke. Early in his presidency, Vladimir Putin made a priority of uniting Russia socially, culturally, spiritually, and economically.
He ordered the arrest of the Rothschild backed oligarch Mikhail Khodorkovsky who had made Rothschild, Henry Kissinger and Arthur Hartman directors of the Open Russia foundation. Putin was so upset with the banksters in his temple, he tipped over their tables and drove them out with a whip.

A keen student of history, well versed in world affairs, the Russian President has studied the history of the world’s most elusive organization and understands the central role their financial collaborators have played in fomenting the major international conflicts of the 20th century. 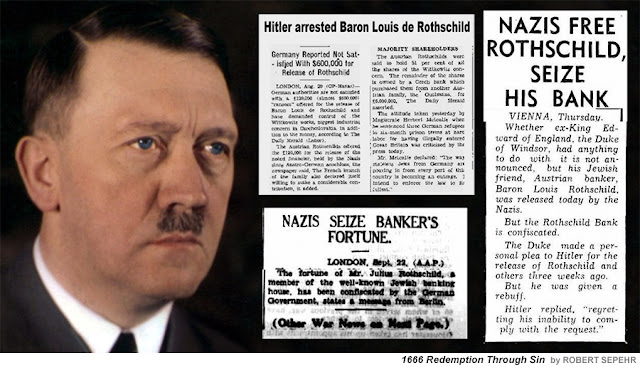 Now they want to plunge us into World War III. The New World Order’s invasive roots and branches keep spreading around the world, but President Putin has stopped them expanding into Russia. This is a major blow to their plans for total global domination and now they view him as a real threat.
Putin has the corrupt globalist bankers running scared, which is why he is degraded in the Western controlled media at every opportunity. The reality is that Putin is leading us towards a multi-polar world, far from the one government, one religion future plotted by the New World Order. When he took his forces into Syria to protect a sovereign state he further enhanced his reputation as a powerful leader. People around the world have started to wake up and notice, and re-thinking the propaganda of the past 70 years.
Source: noscomunicamos

Posted by Atlantean Gardens at 11:17 AM No comments:

Secret of the Lusitania: Arms find challenges Allied claims it was solely a passenger ship 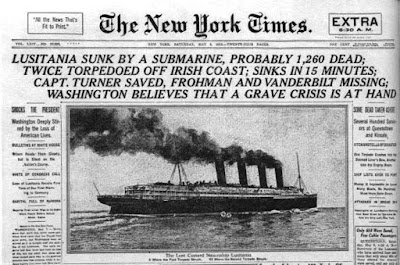 Her sinking with the loss of almost 1,200 lives caused such outrage that it propelled the U.S. into the First World War. But now divers have revealed a dark secret about the cargo carried by the Lusitania on its final journey in May 1915. Munitions they found in the hold suggest that the Germans had been right all along in claiming the ship was carrying war materials and was a legitimate military target.
The Cunard vessel, steaming from New York to Liverpool, was sunk eight miles off the Irish coast by a U-boat. Maintaining that the Lusitania was solely a passenger vessel, the British quickly accused the 'Pirate Hun' of slaughtering civilians. The disaster was used to whip up anti-German anger, especially in the U.S., where 128 of the 1,198 victims came from. A hundred of the dead were children, many of them under two. Robert Lansing, the U.S. secretary of state, later wrote that the sinking gave him the 'conviction we would ultimately become the ally of Britain'.
Americans were even told, falsely, that German children were given a day off school to celebrate the sinking of the Lusitania. The disaster inspired a multitude of recruitment posters demanding vengeance for the victims. One, famously showing a young mother slipping below the waves with her baby, carried the simple slogan 'Enlist'. Two years later, the Americans joined the Allies as an associated power - a decision that turned the war decisively against Germany.

The diving team estimates that around four million rounds of U.S.- manufactured Remington .303 bullets lie in the Lusitania's hold at a depth of 300ft. The Germans had insisted the Lusitania - the fastest liner in the North Atlantic - was being used as a weapons ship to break the blockade Berlin had been trying to impose around Britain since the outbreak of hostilities in August 1914.

Winston Churchill, who was first Lord of the Admiralty and has long been suspected of knowing more about the circumstances of the attack than he let on in public, wrote in a confidential letter shortly before the sinking that some German submarine attacks were to be welcomed.
He said: 'It is most important to attract neutral shipping to our shores, in the hope especially of embroiling the U.S. with Germany. 'For our part we want the traffic - the more the better and if some of it gets into trouble, better still.'

Hampton Sides, a writer with Men's Vogue, witnessed the divers' discovery. He said: 'They are bullets that were expressly manufactured to kill Germans in World War I - bullets that British officials in Whitehall, and American officials in Washington, have long denied were aboard the Lusitania.'

The discovery may help explain why the 787ft Lusitania sank within 18 minutes of a single German torpedo slamming into its hull. Some of the 764 survivors reported a second explosion which might have been munitions going off.

Gregg Bemis, an American businessman who owns the rights to the wreck and is funding its exploration, said: 'Those four million rounds of .303s were not just some private hunter's stash. 'Now that we've found it, the British can't deny any more that there was ammunition on board.

That raises the question of what else was on board. 'There were literally tons and tons of stuff stored in unrefrigerated cargo holds that were dubiously marked cheese, butter and oysters. 'I've always felt there were some significant high explosives in the holds - shells, powder, gun cotton - that were set off by the torpedo and the inflow of water. That's what sank the ship.' Mr. Bemis is planning to commission further dives next year of County Cork. 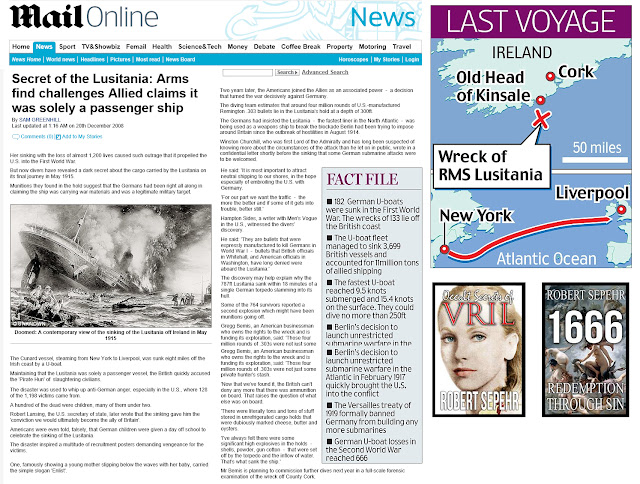 Posted by Atlantean Gardens at 4:48 PM No comments: