A Titanic story about the Federal Reserve Bank - ROBERT SEPEHR

Jekyll Island is located off the coast of the U.S. state of Georgia, where in 1910 some of America's most influential bankers gathered for a secret meeting to plan the country's monetary policy and establish a central banking system, which resulted in the draft legislation for what eventually became the creation of of the Federal Reserve act.

American financier and banker JP Morgan funded and built the Titanic, and was booked on its maiden voyage in 1912, but cancelled at the last minute, unlike the most wealthy and influential opponents to the creation of the Federal Reserve Act, American millionaires who did not owe their fortunes to banking. The Federal Reserve act was passed by Congress the following year in 1913.

The Rothschild family is a wealthy baking dynasty descending from Mayer Amschel Rothschild, in the Free City of Frankfurt, who established his banking business in the 1760s. The Balfour Declaration was a letter dated November 2, 1917 from the United Kingdom's Foreign Secretary Arthur James Balfour to Walter Rothschild, 2nd Baron Rothschild.


For many years, the world has hummed a sweet, optimistic tune, about the benefits of globalization, with the mainstream media constantly touting the advantages of an increasingly inter-connected world, with little appreciation for its uneven benefits.

Robert Sepehr is an anthropologist
http://www.
https://linktr.ee/RobertSepehr
Thank you for supporting Atlantean Gardens!
https://www.patreon.com/user?u=5703352
Posted by Atlantean Gardens at 9:29 PM No comments: 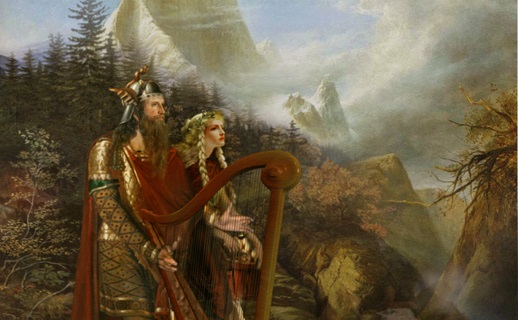 St Patrick's Purgatory is an ancient pilgrimage site on Station Island in Lough Derg, County Donegal, Ireland. According to legend, the site dates from the fifth century, and in modern times a monastery sits over the portal some have called a gateway to Hell.


While casual visitors are not generally allowed on the island, yearly pilgrimage to the site continues to this day where devout worshipers come in droves to take a three-day sojourn of contemplation, fasting, and barefoot prayer, touted as “the toughest in all of Europe, perhaps even in the whole Christian world.”

Saint Patrick was a fifth-century British born Christian missionary and bishop, known as the primary patron saint of Ireland. One of the most famous legends recounts how this great 5th century saint banished all of the snakes from Ireland. We know the pagans of Ireland as the Druids, and their symbol was … the snake.

Anthropologically speaking, human pre-history is divided up into certain segments, some minor and some major, but none more important than the division between the Pleistocene, which includes the time most popularly known as the ice age, and the Holocene, which is our current age for the past 10-12,00 years or so, a time following some major global cataclysms, upheavals, and mass extinctions.

That said, we can further dissect the current Holocene into the neolithic, or stone age, when agriculture appears, or possibly re-appears, when the tools and weapons archeologists find are made from polished stone, starting at around 11 or 12 thousand years ago. This period is followed by the copper age at around 3500 BC - 2500 BC, an era of transition between the stone tool-using farmers of the Neolithic, and the metal-obsessed civilizations of the Bronze Age.

Could there have been a trans Atlantic copper trade in ancient times, and if so, who could have done it? Phoenician comes from the Greek word 'phoinos', meaning 'red'.


Did you know that a sea-faring American tribe explored the shores of North America 7000 years ago? Or that these ancient Americans rivaled their European counterparts in navigational skills several millennia before the Vikings?

Legend of Melusine and the Royal Houses of Europe - ROBERT SEPEHR

Melusine or Melusina is a figure of European folklore and mythology, a female spirit of fresh water in a sacred spring or river, usually depicted as a woman who is a serpent or fish from the waist down, much like a two-tailed mermaid. She is sometimes referred to as the Serpent Mother of European Royalty.

According to the book, "The Serpent And The Swan: The Animal Bride In Folklore And Literature," the name "Melusine" was used as an abbreviation of the words 'Mere des Lusignan' or 'Mother of the Lusignans.' The House of Lusignan was a royal house of French origin, which at various times ruled several principalities in Europe and the Levant, including the kingdoms of Jerusalem, Cyprus, and Armenia, from the 12th through the 15th centuries during the Middle Ages.


Designer babies, anti-aging, and bringing back extinct species. Gene editing, or genetic modification, is a type of genetic engineering in which DNA is inserted, deleted, modified or replaced in the genome of a living organism. Unlike early genetic engineering techniques that randomly inserts genetic material into a host genome, genome editing targets the insertions to site specific locations. The most common method of gene editing is called CRISPR, or Clustered Regularly Interspaced Short Palindromic Repeats. It's a technology that makes use of an enzyme derived from bacteria that can cut through a DNA strand at a specific location, creating an opening where a new segments can be fused in place. The method is cheap, easy to deploy, and has made the possibility of genetically modified human babies in an In vitro fertilization center a reality. Robert Sepehr is an anthropologist and author http://amazon.com/Robert-Sepehr/e/B00XTAB1YC/ Facebook: https://www.facebook.com/atlanteangardens/ https://www.facebook.com/robertsepehr/ https://www.facebook.com/groups/robertsepehr/ Twitter: https://twitter.com/robertsepehr Youtube: https://www.youtube.com/channel/UCMqG0kLgrRv9tODTDG12oZA https://www.youtube.com/channel/UC0gkKMGpCgyun7OoEOseryg Thank you for supporting Atlantean Gardens! https://www.patreon.com/user?u=5703352
Posted by Atlantean Gardens at 4:42 AM No comments:

Nepal's Gadhimai festival takes place every five years at the temple in Nepal's Bara district in honor of the goddess Gadhimai. Celebrations culminate with the world's largest single event of its kind, during which tens to hundreds of thousands of creatures—ranging from water buffalo to pigeons—are ritually slaughtered.

Hinduism is the world's third largest religion, considered a dharma, or way of life, widely practiced in the Indian subcontinent and parts of Southeast Asia. Buddhism is the world's fourth-largest religion with over 520 million followers, or over 7% of the global population, encompassing a variety of traditions, beliefs and spiritual practices resulting in various interpreted philosophies.

The Protestant Reformation was the 16th-century religious, political, intellectual and cultural upheaval that splintered Catholic Europe, setting in place the structures and beliefs that would define the continent in the modern era.


The Reformation movement posed a religious and political challenge to the Roman Catholic Church and papal authority in particular, culminating in the Thirty Years' War, fought primarily in Central Europe between 1618 and 1648. One of the most destructive conflicts in human history, the war resulted in millions of fatalities not only from military engagements, but also from violence, famine, and plague.