The REASON WHY The Prophet Muhammad Used RED Henna 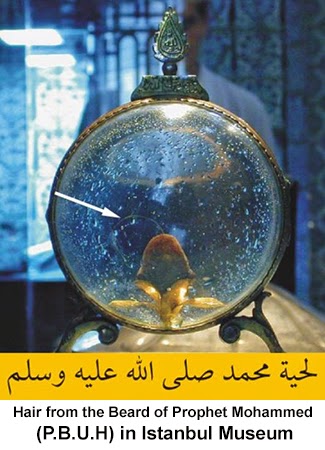 WHY did the Prophet Muhammad start using henna in his later years?  Starting after the age of 40, he began to dye his greying beard red to gain a more youthful appearance, as the Prophet Mohammed himself was reported to have NATURALLY red hair when he was young.
Most Arabic authorities on the issue, themselves usually having brown or black hair and often a relatively dark complexion,  appear to agree that Muhammad was brunet, but Henric von Schwerin has stated that:

"Red-hair is still honoured amongst Moslems as the Prophet Mohammed himself was reported to have red hair." [von Schwerin (1960) 27.]

This image (left) is said to be of actual hair from the beard of the Prophet Mohammed. Known in Turkish as the Sakal-ı Şerif, the beard was said to have been shaved from Muhammad's face by his favoured barber Salman in the presence of Abu Bakr, Ali and several others. Individual hairs were later taken away, but the beard itself is kept protected in a glass container.

This politically incorrect ethnic revelation helps to explain WHY millions of Muslims today, some being of sub-Saharan African origin with black hair, also dye their beards with red henna.  The Prophet Muhammad (AD 570-632), the founder of the Islamic religion, was apparently fair-skinned; a freedman, by the name of Umar, described the Prophet thus:

The Islamic men pictured below, with reddish/orange henna-dyed beards and hair, are Muslim followers living many centuries AFTER the time of the Prophet Mohammed.

The same way that DNA evidence has demonstrated the 99% of MODERN day Egyptians are NOT genetically related to the blond and red-headed Pharaohs, the vast majority of Muslims today have no ethnic relation to the Prophet Mohammed, yet still dye themselves with RED henna out of respect, tradition, and imitation.

"We often see a man of mark who has in his house women of high degree setting above them a girl in a striped gown purchased for a few coins and so we may see a man whose grandfather on the father's side is a fair-haired descendant of Ali while his maternal grandfather is a black idolator." [Lewis (1990) 89.]

There appears to have been a blond, racially Nordic element, amongst the leadership of the Arabic peoples, from the very earliest times. Thus, as the distinguished Harvard anthropologist Carleton S. Coon has noted, when referring to the population of the Yemen plateau:

"The Nordic-looking people are usually confined to the social stratum from which civil officers and religious men are drawn, and it is more than a coincidence that the acknowledged descendants of the Prophet are lighter-skinned and show greater evidence of blondism than the rest of the population. There may perhaps have been a Nordic strain associated with the holy families who entered this region from the Hejaz in early post-Islamic times." [Coon (1939) 408-409.]

Professor C. S. Coon has also stated, that amongst the people of Morocco:

"The ordinary city Arabs are little different from their pastoral and agricultural brethren, but this rule does not apply to the aristocratic families. These merchant-princes are sometimes blond, and of Nordic appearance; others of them look like Mekkan aristocrats in Arabia." [Coon (1939) 484.]

In the mid-eleventh-century, the Hispano-Muslim author Ibn García penned his Risala, which expressed similar sentiments, linking blondness with nobility:

"Of Roman origin and blond, Byzantine lineage, fostered by the possessors of inner virtue, lineal glory, and greatness among the blond ones . . . soft-skinned ones among whom neither the Egyptians nor the Nabateans have implanted; family honour well-guarded and noble lineage."

It would also appear that many of the numerous and diverse rulers of Moorish Spain, were racially Nordic; the Spanish historian Enrique Sordo, informs us that:

"Most of the caliphs were fair or ginger-haired with blue eyes, which seems to show a preponderance of Berber or Germanic blood. As they were extremely proud of their origin, some of them dyed their hair black, as if to affirm their Arab descent." [Sordo (1962) 24.]

This trend towards blondism began with the very first independent Muslim ruler of the Iberian Peninsula. Abd al-Rahman I (AD 756-788), the founder of the Cordoban Emirate, was a Syrian from the Damascus region, and belonged to the imperial Umayyad family: he was a grandson of Caliph Hisham (AD 724-743). His mother was a Berber slave-girl, and his father was the Syrio-Arab Umayyad, Muawiya. He is said to have been a "colossal red-haired man". [Grant (1981) 90; Sordo (1962) 23.]
Stanley G. Payne also provides another example of a fair-haired ruler in Muslim Spain:

"An effectively unified state was finally achieved during the long reign of Abd-al-Rahman III (912-961). The son of a Navarrese princess, this greatest of Cordoban rulers was a short, blue-eyed Muslim who dyed his red hair black to match that of most of his subjects. In 929 he took the step of raising his dominion from an emirate, or kingdom, to a caliphate, or empire." [Payne (1973) 23.]

The fourteenth-century historian Ali ibn Abd Allah, in his Roudh el Kartas, described a Moorish Sultan of the time, Muhammed ben Idriss, as "blond".
In 1232, Muhammad b. Yusuf b. Nasr from Banu 'l-Ahmar, made himself the Sultan of the kingdom of Granada, a feat which he achieved by consolidating several Muslim petty kingdoms in southern Spain. Muhammad I was known as Ibn al Ahmar (son of the red), because of his red hair; he was the founder of the Nasrid dynasty, and ruled from 1232 to 1273. [Sordo (1962) 120; Vollers (1910) 87.]
This trait appears to have continued, even into later periods. Abu 'l-Hadjdjadj Yusuf I, the Nasrid Sultan of Granada from 1333-1354, has been described in the following terms:

"He was of noble bearing and was endowed with extraordinary physical strength and good looks. His skin was too pale however, and, according to Arab historians, he increased his grave and majestic appearance by growing a beard which he dyed very black." [Sordo (1962) 120-121.]

"Among the paintings in the gallery of the Generalife Palace hangs Boabdil's portrait. In it his countenance is kindly, handsome and melancholy, his complexion rubicund and his hair blond." [Sordo (1962) 124.]

"Salah-ed-din and many of his followers had Kurdish and northern blood which accounted for their lighter colouring..." [Gayre of Gayre (1972) 97.]

Al-Nasir al-Hasan, who was Sultan from 1347-1351, and then from 1354-1361, was one of the last rulers of the Turkic Bahri Mamluk Dynasty, which ruled Egypt from 1250-1390. According to the Medieval chronicalist Ibn Iyas, he had a blond beard and dull-blue eyes. [Baltzer (1934) 210; Vollers (1910) 95.]
Sultan Al-Nasir Faraj (AD 1399-1412), was the son of Al-Zahir Barquq [Burji] (AD 1382-1389, 1390-1399), the first of the Burji Mamluk rulers; the Dynasty reigned from 1390 to 1517, and was mostly of Circassian descent. Ibn Iyas stated that he was blond-bearded; he also noted that both Al-Nasir al-Hasan and Al-Nasir Faraj, possessed what he described as "Arab faces," which meant that they had long, noble countenances. [Baltzer (1934) 210; Vollers (1910) 95.]
Ibn Iyas also observed that Sultan Al-Mansur Qalaun (AD 1279-1290), of the Bahri Mamluk Dynasty, had fair hair and a fair complexion. [Vollers (1910) 91.]
During the period of Ottoman rule, Nordic racial elements once again achieved a position of ascendency in the Islamic world. Orhan (AD 1324-1362), the son of Osman I (AD 1280-1324), who was the founder of Ottoman rule in Anatolia, was the first of that dynasty to use the title "Sultan." He is described as being very tall, broad-shouldered, fair-skinned, light-eyed and blond-haired. The German physical anthropologist Professor Hans F. K. Günther, considers him to have been predominantly Nordic in type. [Günther (1934) 189-190.]
Mehmed II (AD 1451-1481), known as the Conqueror, was the Ottoman Sultan that ended the Byzantine Empire, and who occupied the city of Constantinople, converting it into Istanbul. A contemporary miniature of Mehmed, painted by the artist Sinan Bey, depicts him as a light-skinned, light-haired and light-eyed man. [Reader's Digest Association (1974) 127.]
Ottoman rule over North Africa — Algiers, Tripoli, Tunis — was extended and consolidated by the brothers Aruj and Kheir-ed-Din Barbarossa. The name Barbarossa stems from the Italian word for "Redbeard," and the brothers acquired this surname because of their ginger hair. [Baltzer (1934) 211.] Kheir-ed-Din (d. 1546), was appointed Regent of Algiers in 1530, and his reign was largely a success. [Mitchell (1976) 137.] Hans F. K. Günther refers to him as:

"the Viking-like Khair-ed-din Barbarossa, the founder of Osman [Ottoman] rule in North Africa, the red-bearded son of a Greek from Lesbos." [Günther (1927) 173.]

The link given below, leads to a web page which contains depictions of every one of the Ottoman Sultans. It is interesting to observe how many have reddish hair, light eyes, or a fair complexion.
http://almashriq.hiof.no/turkey/900/950/956/sultans/thumbnails.html
We may also note that the Algerian national hero Emir Abd al-Qadir al-Jaza'iri (AD 1807-1883), who fought the French attempts to occupy his country in the 1830s and 1840s, appears to have been blue-eyed. [von Schwerin (1960) 28; von Schwerin (1964) 129-130.]
The racial trends of the Islamic past have continued into the present era; this has been demonstrated by the American author Nathaniel Weyl, who noted the relevant facts in the following manner:

"As Gayre cogently observes, there is a general correlation between blondism and Caucasoid features, on the one hand, and social status and leadership, on the other. This is by no means a recent development nor is it a reflection of the superior prestige and power which Nordics and other blond peoples have come to enjoy in the modern world...

As for the present leadership of the Arab world, Henric von Schwerin has pointed out the extent to which it tends towards blondness and the Nordic type.

The Christian minorities throughout the area are, as Dr. Gayre has observed, almost invariably superior in status, intelligence and ability to the Moslems, and are at the same time markedly blonder and more definitely Caucasoid in features. Moreover, the most vigorous, resourceful and progressive nations in the region — Lebanon and Jordan in particular — are also those with the largest Christian minorities and the greatest visible admixture of Nordic genes." [Weyl (1967) 28-29.]

The Nordic element in the Islamic world continues to play an important role — this is demonstrated by the fact that many of the leading statesmen in the recent history of the Middle East (particularly those who have organized the causes for national liberation and independence), have been predominantly Nordic in type: for instance, Mustafa Kemal Atatürk (1881-1938), the founder of modern Turkey. During the First World War, he fought the Allies at Gallipoli, and after the Armistice in 1918, he prevented a European conquest of Anatolia. After deposing the Ottoman Sultan, he declared himself President of Turkey (1923-1938), and initiated a rapid and thorough process of modernization and secularization, which largely succeeded in westernizing the Turkish Republic. He was blond-haired and blue-eyed — features which he seems to have inherited from his Albanian mother. As a result of this, Henric von Schwerin has stated that Atatürk:

Haj Amin al-Husseini (d. 1974), the Grand Mufti of Jerusalem, was one of the most important individuals in the recent history of the Middle East: he was, for a long period of time, the foremost leader of the movement for Palestinian liberation, as well as being the President of the World Muslim Congress. During his lifetime he was renowned not only for his political activities, but also because his beard was reddish-blond and his eyes were blue. The Swedish authoress Karin Johnsson compared the Grand Mufti to Saladin, and Henric von Schwerin considered him to be: