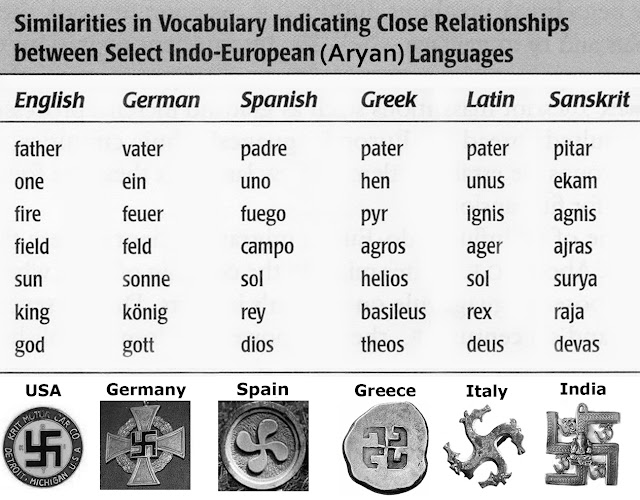 Species with amnesia: Our Forgotten History
Posted by Atlantean Gardens at 8:15 AM 1 comment: 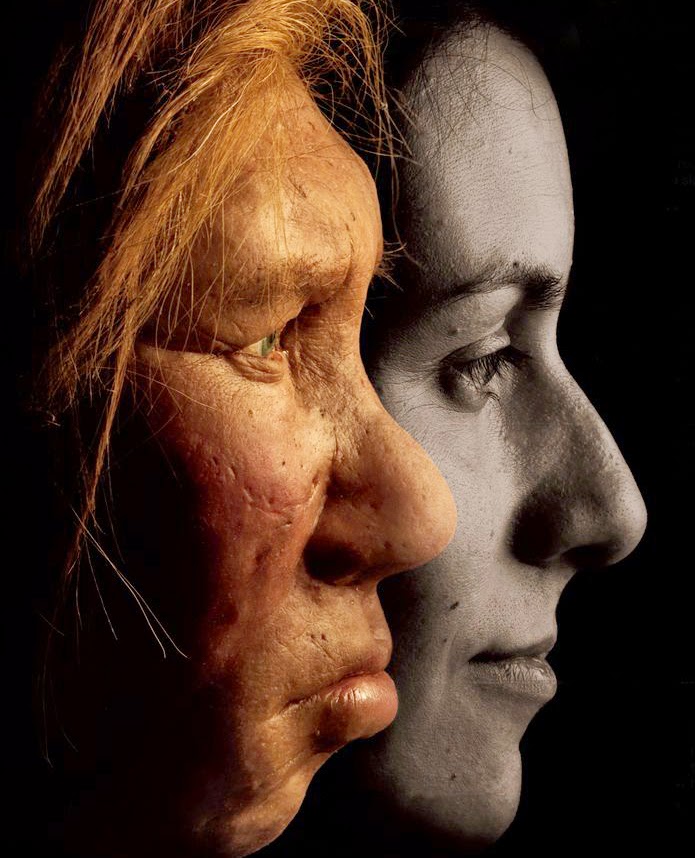 Several genetic studies on modern humans and Neanderthals have proven that both the groups interbred some thousands of years ago. However, fossil remains of the two species have not given conclusive evidence on hybridization.

Now, a new study on hybridization between two species of modern-day howler monkeys in Mexico sheds light on why it is difficult to trace evidence of interbreeding among primates, in particular, ancient humans by analyzing their fossil remains.

Researchers from University of Michigan studied more than 200 adult howler monkeys (mantled howler monkeys and black howler monkeys) that were captured and released in Mexico and Guatemala between 1998 and 2008. These two different species differ in appearance, behavior and number of chromosomes they possess.

Whilst both the groups live in separate habitats, howler monkeys in the Tabasco state of Mexico live in a hybrid zone, where they coexist and sometimes interbreed.  The research team collected blood samples, hair samples and morphometric measurements from the anesthetized animals before they were released in their habitats again. 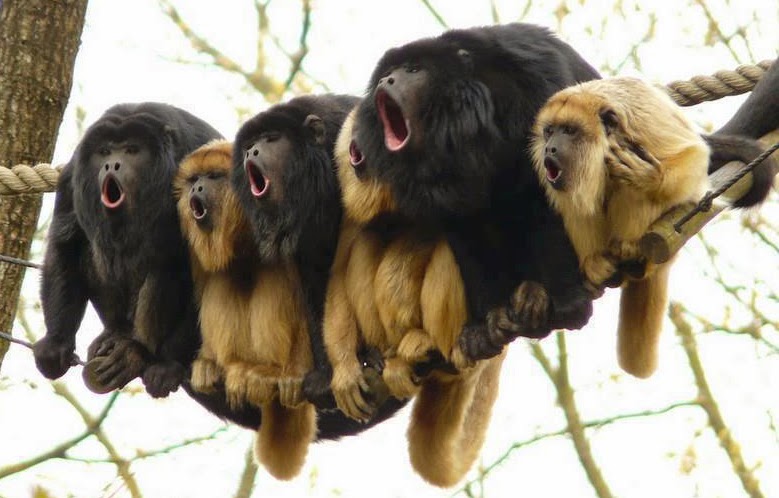 Based on nuclear and mitochondrial DNA analysis, experts detected 128 hybrid individuals that were most likely the product of several years of interbreeding between hybrids and pure individuals. Statistical analyses on body measurements revealed large amounts of differences in the structure (morphology) of individual monkeys belonging to the mixed ancestry.

But researchers found that the individuals of mixed ancestry who shared most of their genome with one of the two species were physically indistinguishable from the pure individuals of that species.

"The implications of these results are that physical features are not always reliable for identifying individuals of hybrid ancestry. Therefore, it is possible that hybridization has been underestimated in the human fossil record," Liliana Cortés-Ortiz, from University of Michigan, said in a statement. 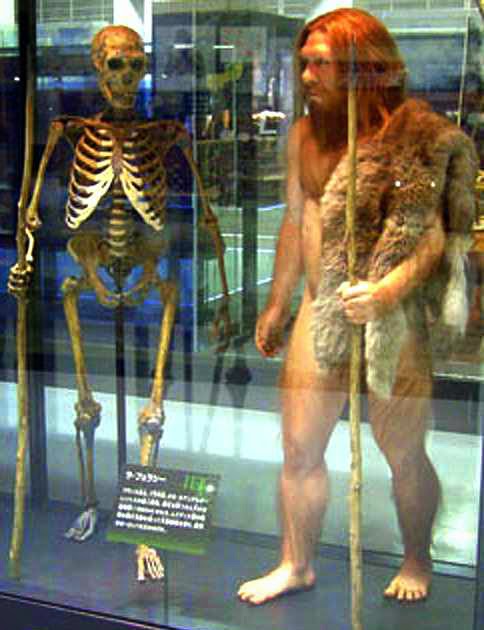 For years, researchers have been attempting to find evidence of interbreeding among human ancestral species using fossil records. Mary Kelaita, now a postdoctoral fellow at the University of Texas at San Antonio, said that the study on monkey "suggests that the lack of strong evidence for hybridization in the fossil record does not negate the role it could have played in shaping early human lineage diversity."
It is now scientifically irrefutable fact that the "human species" has been found to contain a substantial quantity of DNA (at least 20%) from other hominid populations not classified as Homo Sapien; such as Neanderthal, Denisovan, African archaic, Homo erectus, and now possibly even "Hobbit" (Homo floresiensis).

If not given drugs to prevent infant death, the pregnant body of a rhesus negative human mother will attack, try to reject, and even kill her own offspring if it is by a rhesus positive man.  Likewise, the Domestic dog (Canis lupus familiaris) is a sub-species of the gray wolf (Canis lupus), and they produce hybrids.
There are numerous other examples of where two separate species can also produce viable offspring, yet are considered separate species.  The Lions and Tigers are considered separate species, yet Lions and Tigers can produce viable offspring known as "Ligers".

That said, humanity has been shown to be - genetically speaking - a hybrid species that did not all share the same hunter-gatherer ancestry in Africa. Recent sequencing of ancient genomes suggests that interbreeding went on between the members of several ancient human-like groups more than 30,000 years ago, including an as-yet unknown human ancestor. "there were many hominid populations,” says Mark Thomas, evolutionary geneticist at UCL. 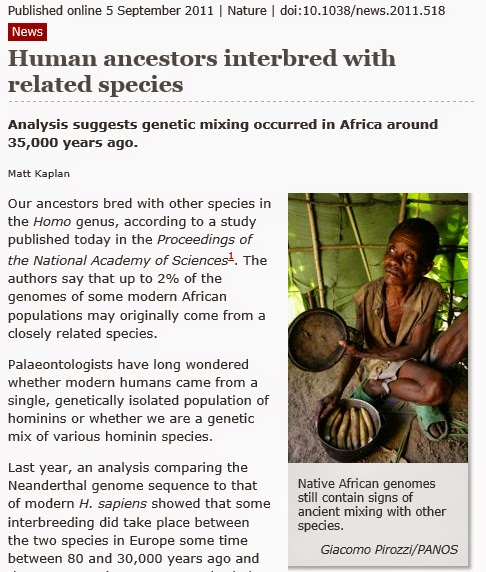 Genetic evidence refuting the theory of modern humanity’s African genesis is common knowledge among those familiar with the most recent scientific papers on the human Genome, Mitochondrial DNA and Y-chromosomes.
Regrettably, within mainstream press and academia circles, there seems to be a deliberate vacuum when it comes to reporting news of these recent studies and their obvious implications.

In their defense, the authors of this paper were fully aware that genealogy is not in any way linked to geography, and that their placement of Eve in Africa was an assumption, never an assertion.
A very recent paper on Y-chromosomes published in 2012, (Re-Examing the “Out of Africa” Theory and the Origin of Europeoids (Caucasians) in the Light of DNA Genealogy written by Anatole A. Klyosov and Igor L. Rozhanski) only confirms the denial of any African ancestry in non-Africans. 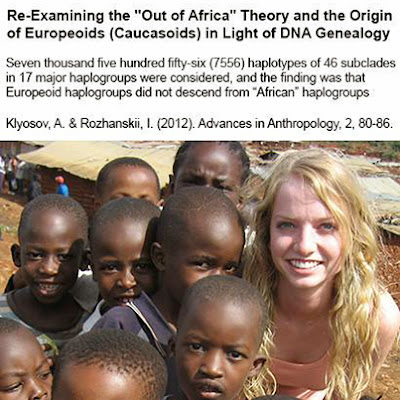 Central to results of this extensive examination of haplogroups (7,556) was the absence of any African genes. So lacking was the sampling of African genetic involvement, the researchers stated in their introduction that, “the finding that the Europeoid haplogroups did not descend from “African” haplogroups A or B is supported by the fact that bearers of the Europeoid, as well as all non-African groups do not carry either SNI’s M91, P97, M31, P82, M23, M114, P262”. With the haplogroups not present in any African genes and an absence of dozens of African genetic markers, it is nigh on impossible to sustain any link to Africa.
The researchers are adamant that their extensive study “offers evidence to re-examine the validity of the Out-of-Africa concept”.  They see no genetic proof substantiating an African precedence in the Homo sapien tree, and maintain that “a more plausible interpretation might have been that both current Africans and non-Africans descended separately from a more ancient common ancestor”.

We regard the claim of “a more plausible explanation” as a gross understatement, since there is absolutely nothing plausibly African turning up in any test tubes. In fact, the researchers made note of their repeated absence stating “not one non-African participant out of more than 400 individuals in the Project tested positive to any of thirteen ‘African’ sub-clades of haplogroup A”. The only remaining uncertainty relates to the identity of this “more ancient common ancestor”. All that can be stated with confidence is that humanity’s ancestor did not reside in Africa.
Unfounded accusations of racism have become common as the prevailing Afrocentric hypothesis is constantly being challenged by the growing mountain of conflicting scientific evidence, especially in the evolving field of genetics.
Species with Amnesia: Our Forgotten History
Posted by Atlantean Gardens at 5:40 PM 2 comments: