This Is Sparta! - ROBERT SEPEHR

"If you worship your enemy, you are defeated.
If you adopt your enemy’s religion you are enslaved.
If you breed with your enemy you are destroyed."
— Polydoros of Sparta (741 to c. 665 BC)
Sparta was a prominent city-state in ancient Greece, known as Lacedaemon in antiquity,
in south-eastern Peloponnese. 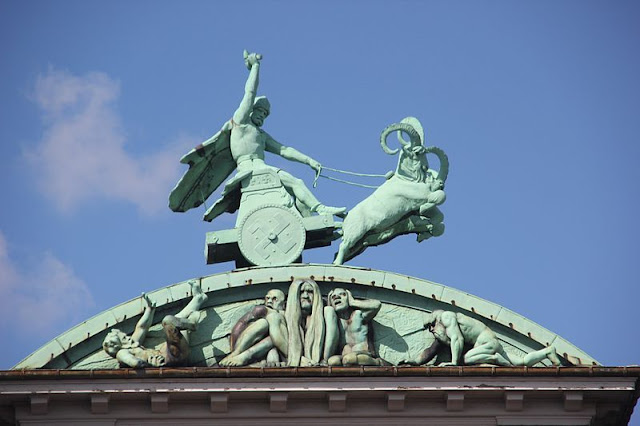 Thor is the Norse god of thunder, the sky, and agriculture. He is the son of Odin, and the defender of Asgard, realm of the gods, and Midgard, the human realm. He developed from the earlier Germanic god Donar and became the most popular deity of the Norse pantheon. The modern English and German words for the fifth day of the week – Thursday and Donnerstag – both allude to Thor/Donar (“Thor’s Day”/“Donar’s Day”).

Dr. Wernher von Braun was one of the most important champions of space exploration in the twentieth century. Born in what was then the German Empire and is now Poland, he became enamored as a youth with the possibilities of space exploration by reading science fiction, which eventually prompted von Braun to later master calculus and trigonometry, so that he could understand the physics of rocketry.

From his teenage years, von Braun had held a keen interest in space flight, becoming involved in the German Society for Space Travel, and then, to work for the German army to develop liquid-fuel rockets. in conjunction with Dr. Hermann Oberth, an Austro-Hungarian-born German physicist and engineer.

In pre-WWII Germany, the sisters of Vril (light) conducted research into psychic phenomenon, advanced propulsion technology and saucer-shaped aircraft. National Socialist Germany claimed the territory of New Swabia in Antarctica, sent an expedition there in 1938, and began building secret deep underground bases below the ice. They defeated a "post WW2" attack by Allied forced in 1946, led by Admiral Byrd, who retreated in disgrace after suffering substantial damage and casualties (see Operation Highjump).

In memory of Vladimir Terziski
Posted by Atlantean Gardens at 6:44 AM No comments:

In Indo-European or Aryan cultures, the thunder god is frequently known as the chief, or King, of the Gods. Examples include Indra in Hinduism, Zeus in Greek mythology, Jupiter to the Romans, Perun in the ancient Slavic religion; Orko in Basque mythology. Thor, son of Odin, in Norse mythology. Marduk in Sumerian-Babylonian-Assyrian mythology. Hadad in Canaanite and Phoenician mythology.