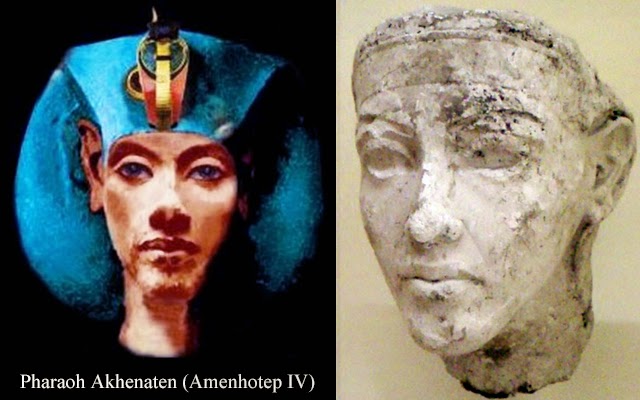 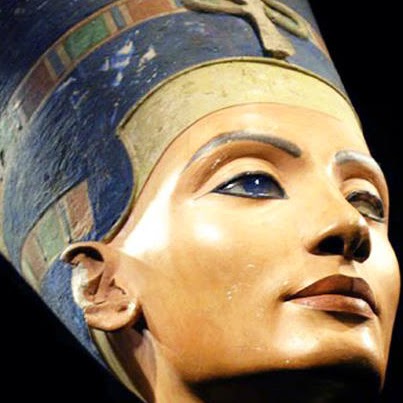 With her husband, Nefertiti reigned at what was arguably one of the wealthiest periods of Ancient Egyptian history. She was made famous by her bust, now in a Berlin Museum, shown to the left.

She had many titles including Hereditary Princess, Lady of Grace, Sweet of Love, and Lady of The Two Lands. Nefertiti and her husband were known for a religious revolution, in which they worshiped one god only, Aten, or the sun disc.

When Amenhotep IV moved the capital to Amarna, he officially changed his name to Akhenaten, and Nefertiti was henceforth known as Neferneferuaten-Nefertiti. Her bust is one of the most copied works of ancient Egypt. 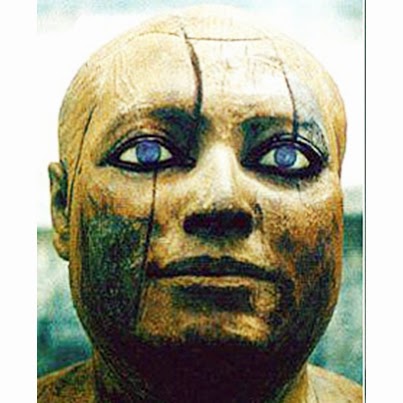 This is the oldest known life-size wooden statue in ancient Egypt. It is from the 5th Dynasty and that of chief priest Ka-aper, found at Saqqara, with deep crystal blue eyes.

The eyes are inlaid; the rim is made out of copper in imitation of makeup that vividly brings the face of the priest to life and reflects his self-important personality.  The white of the eye is of opaque quartz, while the cornea is made out of beautiful blue rock crystals.

The use of sycamore wood was sacred under the protection of the goddess Hathor, one of whose titles was ‘the lady of the sycamore’. 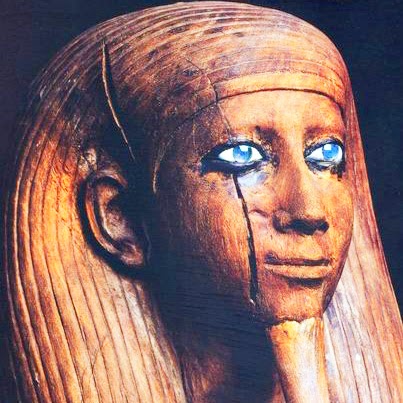 The image to the left is of an original wooden statue of the Egyptian King Hor (circa 1783—1633 1633 BC), on display at the Cairo Museum, Egypt. The amazing eyes of the statue, inlaid with quartz or lapus lazuli, shine up intensely with either blue or gray eyes, depending upon the lighting.

King Hor's rule was  during the 13th Dynasty of Egypt. He appears in the Turin King's List as as Au-ib-Ra. Hor is mainly known from his burial in a shaft tomb found at Dahshur next to the pyramid of king Amenemhat III.

He most likely reigned only for a short time, not long enough to prepare a pyramid, which was in this dynasty still the common burial place for kings.

Over 4,400 years old, from ancient times the role of the scribe has been an important one. Such men had to be very efficient at writing hieroglyphs quickly, and also be well-educated in mathematics.

Photos such as this are very rare because photography is no longer permitted in the Egyptian Museum. The eyes are set in limestone and ringed with copper to attract the attention of the observer to Mitri’s calm gaze of deep blue and becomes the focal point of the whole sculpture. 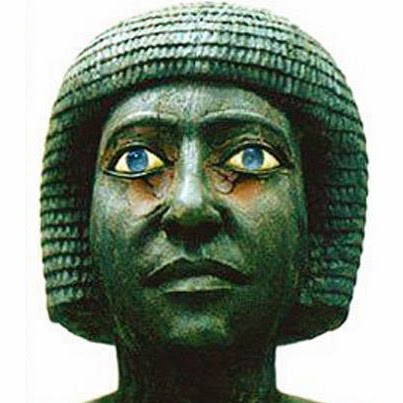 Another lifelike wooden statue from the 5th Dynasty (2400 BC) of  ancient Egyptian nobility with inlaid blue eyes.

This kind of technique used on the eye is known from the Fourth Dynasty to the Thirteenth Dynasty: it is an admirable imitation of the natural eye.  The eyelid outer edges are made of a narrow metal frame surrounding the eye ball.

The eye color is a beautiful ocean blue (somewhat grey depending on the light), and the word "wedjat" means "blue" in Egyptian. The rock crystal used for the eyes was a blue and they appear to be made of a translucent material, something like glass or crystal.

If the blonde hair of the Egyptian mummies you see pictured was simply a side effect of the mummification process, then why are the statues of the royal Egyptian Pharaohs and nobility pictured depicted with blue eyes? 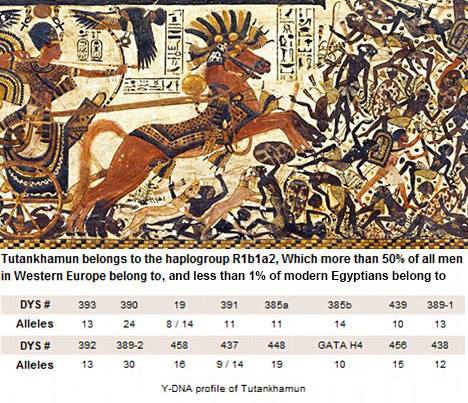 King Tut's DNA results may help to reveal the answer. The Pharaoh's genetic type belonged to haplogroup R1b1a2, to which 70% of all Western European men belong, indicating that they share a common ancestor. Among MODERN-day Egyptians this haplogroup contingent is below one percent.

Posted by Atlantean Gardens at 10:30 AM