Inside of an Ancient Underground City - ROBERT SEPEHR


In ancient times, Humans liked to build cities that reached for the sky, but sometimes they also built downward. Whether for protection, exploration, or just because they could, civilizations have created many cities beneath the Earth's crust - or dug deep into the rocky faces of mountains.

Long ago, in the region surrounding Nevsehir and Kayseri, in central Turkey, an ancient people built, or rather dug, over 200 underground cities. The deepest of these, under the present day town of Derinkuyu, delves over 250 feet below the Earth’s surface, and boasts numerous tunnels, halls, meeting rooms, wells and passages.

Because the city was carved from existing caves and underground structures that had first formed naturally, there is no way to discern, with traditional archaeological methods of dating, when exactly Derinkuyu was built. As such, and with ties to the Hittites, Phrygians and Persians, Derinkuyu presents a fascinating riddle for ancient mystery enthusiasts.

Derinkuyu is located in the Cappadocia region of Turkey, a place renowned for its unique geology. At the dawn of time, volcanoes in the area covered it with a thick layer of ash. Over the years, this ash transformed into a soft rock that itself eroded over the eons, leaving an exotic landscape of pocked spires, columns and rough pyramids.

Perhaps inspired by their surroundings, ancient people began to carve the soft ash rock into tunnels and rooms to be used as residences, storage, stables and religious temples. Derinkuyu seems to attract the most attention of all the underground cities because, until 1963, people were unaware that this deepest of the underground cities even existed. 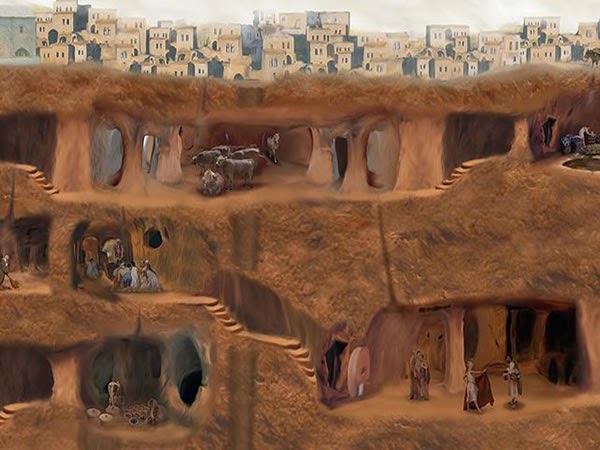 The underground city at Derinkuyu has 18 stories that descend far into the Earth. Sophisticated shafts, some as long as 180 feet, provide ventilation to the complex’s multitude of residences, communal rooms, tunnels, wine cellars, oil presses, stables and chapels. 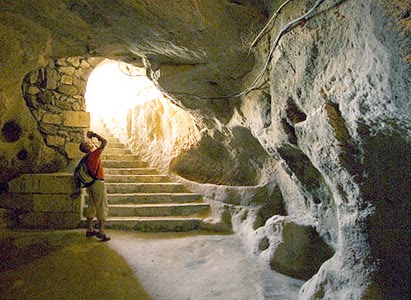 The city also has numerous wells to provide fresh water. So many, that most scholars agree that Derinkuyu could have easily supported as many as 20,000 people. It is widely presumed that the city was part of a larger complex; in support of this, many point to a commonly-believed rumor that a tunnel extends from Derinkuyu to its sister underground city, Kaymakli, some three miles away. Conventional wisdom holds that these cities were built for the same reasons other people built citadels and castles – to protect the populace during invasion. Some of the strongest evidence to support this theory includes the self-contained fresh water supply, as well as the enormous stone, circular doors, weighing up to 1,000 pounds, that could seal off passageways from invaders.

Derinkuyu had been lost to time until, during renovations on a modern home, an opening to a cave passage was revealed. Although visitors have been allowed in the underground city since 1965, many passages and rooms still remain inaccessible.

There is no consensus on who built Derinkuyu or when construction first began. Some suggest that the earliest construction started with the Hittites in the 15th century BC. The Anatolian Hittites, distinct from the group described in the Christian Bible, controlled a large portion of Asia Minor extending from the Black Sea to the Levant. Cappadocia, and Derinkuyu, were smack in the middle of their territory. 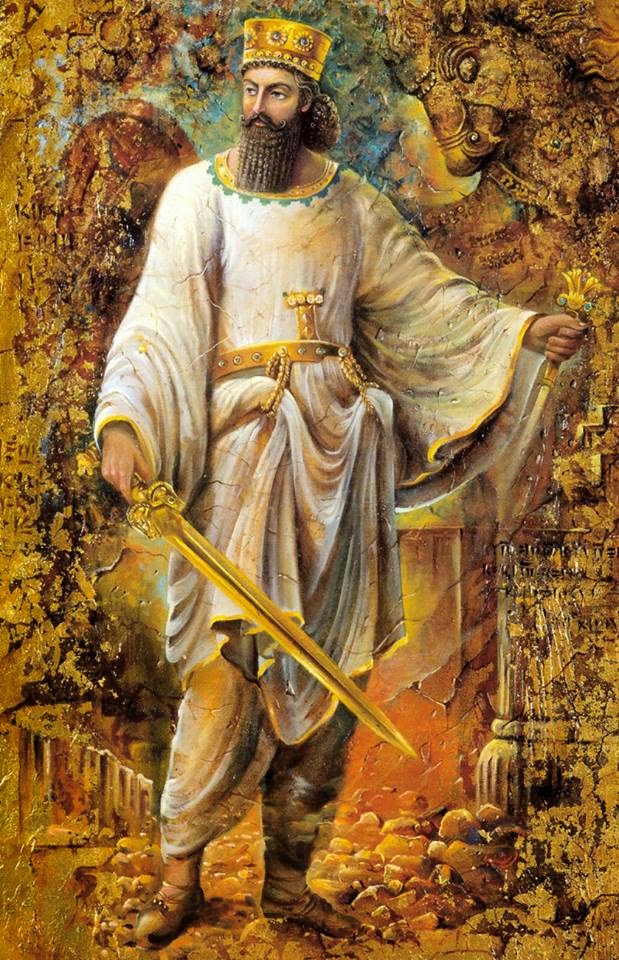 Others are not convinced of a Hittite origin and point instead to the Phrygians. One of the Thracian tribes that sacked Hattusa around 1180 BC, the Phrygians controlled the region until approximately the 6th century BC when they were conquered by the Persian host under Cyrus the Great.
The second chapter of the Vendidad, a section of the Zoroastrian book Avesta, includes the story of how the great and mythical Persian king Yima created places underground to house “flocks, herds and men.”
Relying on this, some opine that Derinkuyu was built by ancient Persians; since the Avesta dates to the founding of Zoroastrianism (1500-1200 BC), Persian construction on the site would have to have pre-dated any construction done by the Hittites.
Although intriguing, because the Vendidad makes no clear link with Derinkuyu, this theory has little mainstream support.
Regardless of who built it, later generations have inhabited it. Many believe early Christians used the underground cities of Cappadocia, including Derinkuyu, as a place to hide from Roman persecution. In support of this claim, they point to the fact that Saint Gregory and Saint Basil had both presided in Cappadocia during the 4th century AD.

In a unique design, the city was built like a honeycomb, with walls shared between different houses and doors cut in the roof so people had to climb on top to get inside. What's more, the dead were buried in the floor of their homes. It's not clear what happened to the earliest original inhabitants of this ancient city. Posted by Atlantean Gardens at 11:07 AM