An ancient royal tomb, older than the Inca civilization, and filled with treasures and mummified women dating back over 1,200 years, has been found in Peru. This is the first such tomb belonging to South America’s Wari civilization found untouched by vandals, the National Geographic said. 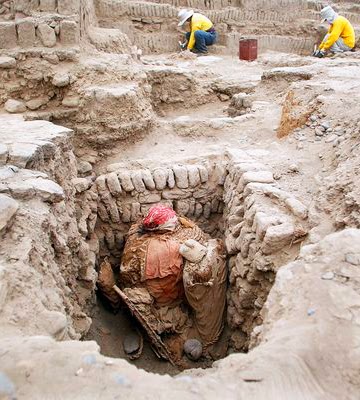 Long before the Inca built Machu Picchu, the Wari empire flourished throughout much of present-day Peru. At a time when Paris had just 25,000 residents, the Wari capital Huari was home to 40,000 people at its height, according to National Geographic, which reported the find.

Though the surrounding site has been looted many times, this mausoleum has managed to evade grave robbers for hundreds of years, archaeologists say. The fact that most of the skeletons were of women and the very rich grave goods, leads archeologists to the interpretation that this was a tomb of the royal elite.

Protected from looters by 30 tons of stone, those interred in the mausoleum lay exactly where Wari attendants left them long ago. It is very likely that the children's bodies found inside were placed there as an offering, and to accompany the prominent person.

"The adult was likely a master weaver", said Isabel Flores, an archaeologist at Pucllana. "The infant", she added, "was probably killed and buried in the tomb as an offering in the adult's honor. When we unwrap the bodies, we will be able to determine the adult's age, position in society and gender," said Ms Flores. 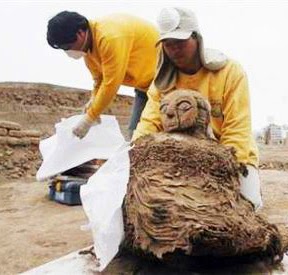 The Wari civilisation was active in an area that now contains Lima from approximately 600 to 1,000 AD, some 500 years before the Inca empire emerged.

Seventy Wari tombs have been unearthed at the Pucllana site, which is nestled in a residential neighbourhood in central Lima. The funerary bundles are large textile wrapped individuals. The bundles themselves appear like individuals, with a large circular body and a false head made of textile or wood.

Ms Flores and Gladys Paz, the head archaeologist of the team that made the discovery, both said that this most recent find is among the site's richest treasures yet.

"This is the most important find in decades of excavation, because the mummies are intact," said Ms Paz.

Piercing blue eyes undimmed by the passing of 1,300 years, this is the Lady of the Mask – a mummy whose discovery could reveal the secrets of a lost culture. She was found by archaeologists excavating a pyramid in Peru’s capital city.

It is the first time a tomb from the region’s Wari culture has been discovered intact and gives historians the chance to pin down exactly how the pre-Incas buried their dead.


The mummy - assumed to be a noblewoman because of the ornate mask - was found in a crouching position surrounded by ceramics and textiles associated with female weavers.

“Her face startled me at first,” said 19-year-old Miguel Angel, one of the workers who carried her body out of the tomb. "I wasn’t expecting to find anything like that.” Earlier the workers at the site removed other adult mummies found lying near the lady of the mask.

Posted by Atlantean Gardens at 6:09 PM