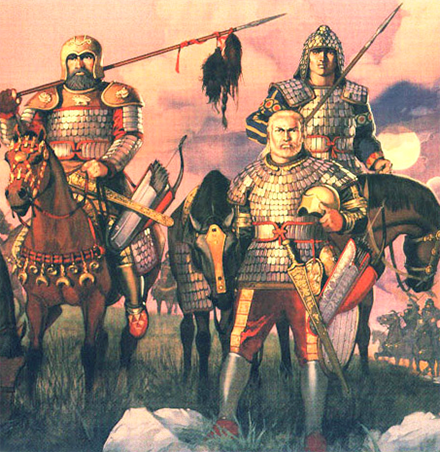 The Scythians were composed of Aryan tribes of proto-Iranian equestrian communities who were semi-nomadic and mentioned as inhabiting large areas in the central Eurasian steppes since at least the second millennium BC. Their territories were known to classical Greek sources as Scythia.

The "classical Scythians" most often spoken about by ancient Greek historians were located in the northern Black Sea and fore-Caucasus region.

However, other Scythian groups encountered in Near Eastern and Achaemenid sources existed in Central Asia. In their life and habits they much resemble the people of Parthia.

Moreover, the term "Scythian" is also used by modern scholars in an archaeological context, i.e. any region perceived to display attributes of the proto-Aryan civilization or "Scytho-Siberian" culture. 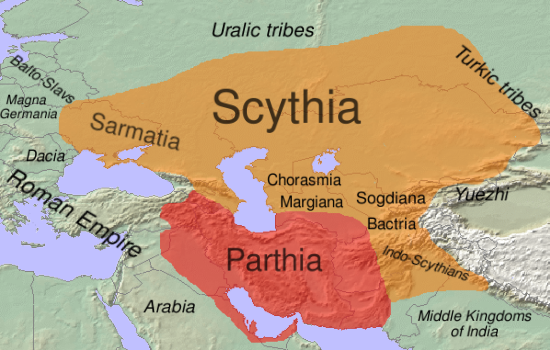 Much of what is known of the history of the Scythians comes from the account of them by the ancient Greek historian Herodotus, who visited their territory.

In modern times this record has been expanded chiefly by the work of Russian anthropologists. Numerous ancient DNA samples have now been recovered from the putative 'ancestors' of the historical Scythians.
Physical and genetic analyses have unanimously concluded that the Scythians, even those in the east, possessed predominantly "Europioid" features, although mixed 'Euro-mongoloid' phenotypes also occur, depending on period.

The haplotypes and haplogroups of 26 ancient human specimens from the Krasnoyarsk area in Siberia were dated from between the middle of the 2nd millennium BC and the 4th century AD, nearly all belong to haplogroup R-M17.
The data shows that the constellation of populations known variously as Scythians were blue- (or green-) eyed, fair-skinned and light-haired people who also played a major role in the early development of the Tarim Basin civilization.

Politically motivated Anthropologists promoting a false Marxist inspired egalitarian version of history have gotten a much deserved slap in the face recently from a number of archaeological discoveries in the Orient which indicate that the original founders of many Eastern philosophies and civilizations - which are so revered by "New Age" types who despise anything Caucasian and European - were in fact racial Aryans. 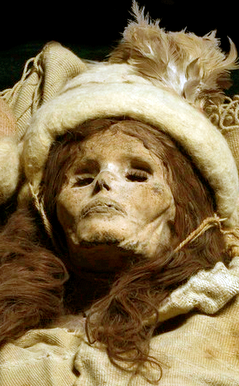 One famous example is the country of Iran, which takes its name from its original conquerors; until 1978 one of the many formal titles of the SHAH was "Lord of the Aryans." Etched in cuneiform, the ancient term Aryan pre-dates WW2 by millenia.

Hundreds of these perfectly preserved 4,000 year old Aryan mummies and their pyramids discovered in central Asia were from a period prior to the accepted establishment of the Silk road. These are the earliest known inhabitants to the area and pre-date the modern Asian inhabitants by over a thousand years.

These ancient blond mummies are often over 6'6" tall, carry swastika symbols, and are said to have introduced pre-Buddhist Aryan philosophy to 3/4 of Asia. They are responsible for many of China's massive ancient pyramid structures, as well as contributing to China's earliest civilization/emperors, immortalized as their blue-eyed "Sun-Gods" of legend.

In a recently unearthed grave in the Gobi Desert, nearly two pounds of still-green Marijuana was found buried with the ancient Aryans has proved to be at least 2,700 years old.  A barrage of testing has confirmed that the marijuana possessed highly potent psychoactive properties and casts doubt on the theory that the ancients only grew the plant for hemp in order to make clothing and rope; They apparently were getting high.

Lead author Ethan Russo told Discovery News that the marijuana "is quite similar" to what's grown today. "We know from both the chemical analysis and genetics that it could produce THC (tetrahydrocannabinolic acid synthase, the main psychoactive chemical in the plant)," he explained.

It was found lightly pounded in a wooden bowl in a leather basket near the head of a blue-eyed man who died when he was about 45. The well-preserved mummy of a seemingly Caucasian shaman with a Roman nose and deep-set eyes was unearthed from a cluster of ancient tombs in 2003 and research work has been going on ever since.

Cannabis was not only used by the Scythians for relaxation, but for ceremonies for the dead. In a passage written in about 450 B.C., Herodotus describes the funeral rites of the Scythians as follows:

"...when, therefore, the Scythians have taken some of this hemp, they creep under the cloths and put the seeds on the red hot stones; but this being put on smokes, and produces such a steam, that no Grecian vapor-bath would surpass it. The Scythians, transported by the vapor, shout aloud."

The Royal Scyths were headed by a sovereign whose authority was transmitted to his son. Eventually, Somewhere round the time of Herodotus, the royal family intermarried with Greeks.

In 339 the ruler Ateas was killed at the age of 90 while fighting Philip II of Macedonia. The community was eventually destroyed in the 2nd century BCE, Palakus being the last sovereign whose name is preserved in history.

Posted by Atlantean Gardens at 5:40 AM