Archaeologists have resumed excavations at Zeleniy Yar, a remote site near the Arctic Circle known to the indigenous Nenets people as “the end of the earth”. This same site has already revealed nearly a dozen mysterious blond and red-haired mummies who appear to be foreign to the region, and whose artifacts can be traced back to ancient Persia, nearly 6,000 kilometres away. Scientists are undertaking genetic testing to determine the origins of the mummies and unlock the secrets of this mysterious Aryan civilization. 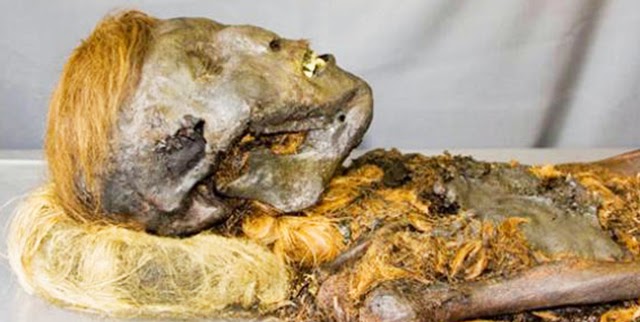 During the last decade Russian archaeologists discovered 34 shallow graves and 11 mummified corpses in what appears to be a necropolis dating back 800 years. However, excavations were halted due to locals living on the Yamal peninsula who argued that the work was disturbing the souls of their ancestors, a plea which has been ignored by the current team of researchers, headed by Alexander Pilipenko, research fellow of Institute of Cytology and Genetics, part of the Siberian Branch of the Russian Academy of Sciences.

The finding was extremely rare – the mummies were found in a well-preserved state, seemingly by accident, and wearing copper masks. Seven male adults, three male infants, and one female child were discovered, buried among a hoard of jewelry and other artifacts. Their skulls are shattered or missing, while the skeletons were smashed. Five mummies are covered in copper, as well as reindeer, beaver, wolverine, or bear fur. 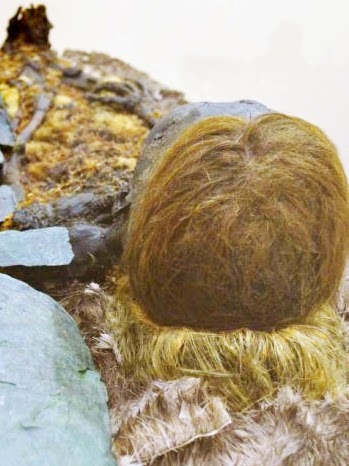 One of the mummies is a red-haired male, protected from chest to foot by copper plating. In his resting place, was an iron hatchet, furs, and a head buckle made of bronze depicting a bear.
Researchers believe that the mummification of the bodies was not intentional but was caused by a combination of the copper, which prevented oxidation of the remains, and a dip in temperatures in the centuries after the group were buried.
“Nowhere in the world are there so many mummified remains found outside the permafrost or the marshes’” said Natalia Fyodorova, of the the Russian Academy of Sciences.
Ms Fyodorova also believes that the condition and orientation of the remains reflect some type of religious ritual. She suggested that the smashing of the skulls may have been done soon after death “to render protection from mysterious spells believed to emanate from the deceased”.
The feet of the deceased are also all pointing towards the nearby Gorny Poluy River, which is seen as having religious significance. 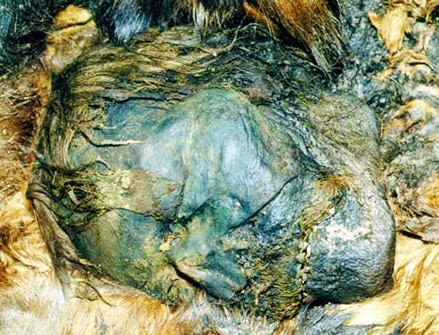 However, such burial rituals are said to be unknown to experts and not typical of others in the region, which suggests that the mummies belong to a foreign race of people, possibly the mythical Aryans.
Indeed, the artifacts suggest this possibility.  Some of the items found at the site, including bronze bowls, originated in Persia some 3,700 miles (6,000 km) to the south-west and dating from the 10th or 11th centuries. The discovery adds to the evidence that Siberia was not an isolated wasteland but a crossroads of international trade and cultural diversity.
Featured image:  A red-haired man was found, protected from chest to foot by copper plating.
Picture: Kate Baklitskaya, Go East
History of the Medes: Magi and Enchanters of Old
Posted by Atlantean Gardens at 12:54 PM