The Giants of Monte Prama

The Giants of Monte Prama are ancient stone sculptures created by the Nuragic civilization of Sardinia, Italy. Fragmented into numerous pieces, they were found by accident in March 1974, in farmland near Monte Prama, in the comune of Cabras, province of Oristano, in central-western Sardinia. The statues are carved in local sandstone and their height varies between 2 and 2.5 meters tall (6 - 8 feet).

After four excavation campaigns carried out between 1975 and 1979, the roughly five thousand pieces recovered – including fifteen heads and twenty two torsos – were stored for thirty years in the repositories of the National Archaeological Museum of Cagliari, while a few of the most important pieces were exhibited in the museum itself.

Along with the statues, other sculptures recovered at the site included large models of buildings and several sacred stones normally associated with one or more Giants' graves.

On the whole the statues are highly stylized and geometrically shaped, similarly to the so-called "Daedalic style", well established in Crete during the 7th century BC.
The face of the statues follows a T-scheme typical of Sardinian bronzetti or bronze statuettes, and of neighbouring Corsican statues. Superciliary arch and nose are very pronounced, the eyes are sunken and symbolically rendered by two concentric circles; the mouth is incised with a short stroke, linear or angular.

The best preserved head exhibits an "envelope-shaped", crested and horned Nuragic helmet that – like archers' helmets – must have presented the typical long horns portrayed in bronze figurines. Several small cylindrical fragments have in fact been found during excavations. Once recomposed, some of these horns appear to bear small spheres at their terminal ends.

The prehistoric altar of Monte d'Accoddi was built in two phases at the time of the Culture of Ozieri (4000-3200 BC) and the culture of Filigosa and Abealzu (3200-2700 BC). It has the aspect of a pyramid or ziggurat with an access ramp. Around it there is a large village (not excavated). 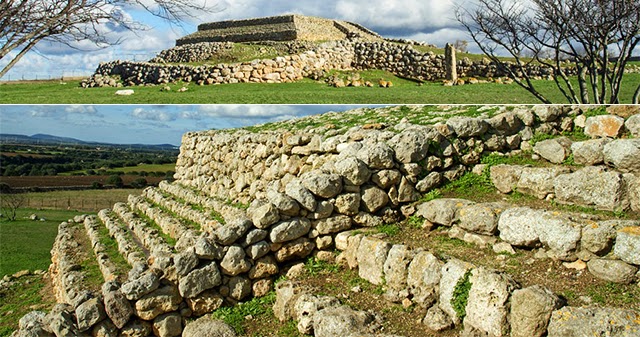 Prehistoric Temples Of Malta
Posted by Atlantean Gardens at 8:37 AM