Who were the ancient GIANTS of North America? 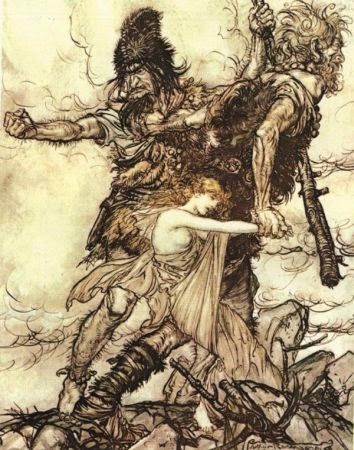 Most Americans believe that the Native Americans were the first to inhabit the North American continent. Yet there were others – a much more ancient race that walked the hills and valleys, the plains and deserts of the pre-Colombian Americas.

Evidence of giant humans – people seven to ten feet tall – exists in the fossil records, tools and other artifacts recovered from archaeological digs.

Giant skeletal remains have awed and sometimes frightened researchers and explorers as far back as the Sixteenth Century.

Some present day Native American tribes still recite the legends of the giants and how their ancestors fought wars against them when they arrived in North America 15,000 years ago only to find the giants already here. Others, like the Aztecs and Mayans recorded their encounters with a race of giants to the north when they ventured out on expeditions.

The earliest Western explorers who wrote about the giants of North America included Magellan, Sir Francis Drake, Spanish explorer Desoto, and Commodore Byron the grandfather of the famous poet, Lord Byron. Not all encounters with giants were post-mortems. A well-documented sighting by Magellan occurred in 1520 near the harbor of San Julian, Mexico. There, Magellan and his crew came upon a red-haired giant that stood nearly ten feet tall and whom Magellan described as having a “voice like a bull.” Later, Magellan learned from normal-sized natives that the giant belonged to a neighboring tribe. Remarkably, Magellan’s logs show that he and his crew captured two of these living giants and brought them aboard his ship intending to bring them back to Europe. Unfortunately the giants grew ill and they both died during the return voyage. Magellan had their remains buried at sea.  Fifty-eight years later giants still roamed San Julian. None other than Sir Francis Drake recorded encountering several red-haired men who stood over nine feet tall. In the years that followed many more explorers and seafarers also reported seeing giants roaming that area.

Two lesser known explorers, Jacob le Maire and Wilhelm Schouten, discovered an intact skeleton of a pair of nine-foot humans. They each entered meticulous descriptions of the skeletons in their journals. If a race of mostly red-haired giants dwelled in the Americas for many centuries, wouldn’t their remains and artifacts – not to mention the sites where they lived – still remain? They do! And many are found in the “mounds.”

The mysterious mounds and mound builders

The mounds (some are flattened pyramidal structures) are ceremonial and religious sites that have been covered over with earth as the centuries marched forward. Most mounds resemble small, flattened hills. 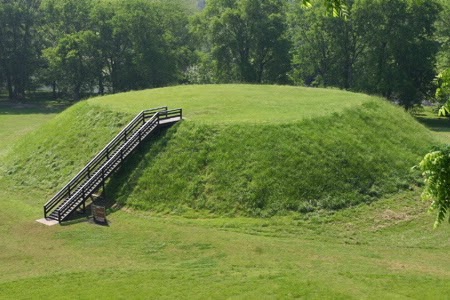 The mounds are scattered throughout the Midwest from as far south as Tennessee stretching northwards into Wisconsin, westwards to Oklahoma, and eastwards into West Virginia. Excavation of most mounds has unearthed many artifacts and the remains of average-sized humans. But older mounds have been discovered containing the skeletal remains of giants, with red hair. Yet, in relation to the number of the mounds that exist barely any have been investigated. The few gigantic skeletons found in some have been derisively dismissed or suppressed as aberrations. Ten and twelve foot humans do not fit dogmatic theories. Usually when giant skeletons are found they’re laughed off as hoaxes.

Unfortunately orthodox science has too much to lose by investigating the mounds thoroughly. Archaeologists cannot deny that the mound builders are real. What they deny are the things sometimes discovered inside the mounds. Over the past century and a half it’s been revealed again and again that some of the mounds – and the small pyramids – are the burial grounds of huge men often eight feet or taller that had a very sophisticated culture. Some of the giants have been found wearing intricate leather armor and have been buried with swords. One such giant was found near Spiro Mound in Oklahoma during the 1930s.

Sadly, there is evidence to suggest that the preeminent Smithsonian Institute has itself acquired artifacts and the remains of giants and then quietly suppressed knowledge of their acquisition. An odd story from the late Ivan T. Sanderson, a popular author of many books and respected zoologist, supports the allegation some make that the Smithsonian has had a penchant for burying inconvenient artifacts since the 1800s.

Sanderson received a letter from a former Navy Seabee who’d been posted at a base on one of the Aleutian Islands southeast of mainland Alaska during the Second World War. The Seabee was an engineer and had overseen a crew building a new airstrip. During the construction a small group of hills (possibly mounds) had been razed by a bulldozer. To their astonishment the crew discovered human remains. The unsuspecting Seabees uncovered the rest of the “hills” and revealed an ancient graveyard containing the bones of giants. Most of the surviving bones were skulls and the remains of thigh bones.

The Seabee’s letter described the site in some detail and then went on to mention that the skulls measured an incredible two feet from their bases to their crowns, much larger than normal human skulls. By extrapolation the engineer concluded that the actual men had stood as high as twelve to fourteen feet.

Always the intrepid investigator at heart, Sanderson sought confirmation and corroboration. He contacted other members of that military unit and received another reply. The second letter from one of the crew members basically reiterated the engineer’s story.
Both letters Sanderson had received asserted that the Smithsonian Institute had been sent the giants’ remains. Each man also mentioned that they had never heard anything further about the matter. When Sanderson contacted the Smithsonian they replied that they had no record of ever receiving any such skeletal remains.

Convinced that the Smithsonian had obtained the shipment from the Navy men in the Aleutians, Sanderson puzzled over the reason why the Institute lied, “Is it that these people [the Smithsonian Institute] cannot face rewriting all the text books?”

Researcher and crypto-archaeologist Dave Cain has studied the records concerning discoveries of ancient giants that have been excavated in and around Marion County, West Virginia: “Of the many archaeological mysteries, one of the most enigmatic has been discoveries of giant prehistoric human skeletons.

“Marion County was home to part of the ancient civilization which historical accounts and artifacts indicate existed in this region. What mysterious people constructed earthen forts, burial mounds, macadamized roadways? Who left pictographs, inscribed stones and giant skeletons to be discovered?

“In the 1850s while excavating a root cellar in Palatine (East Fairmont), workers uncovered two very large human skeletons. Measuring the bones, people were amazed to find the entombed humans had been more than eight feet tall.

“It was reported that hundreds of ancient pieces of pottery, flint weapons, stone carvings and skeletons were peddled at the Valley Falls railroad station. Some of the finest specimens were purchased by visiting German royalty and taken to Europe as curios.

“In 1875 workmen were constructing a bridge near the mouth of Paw Paw Creek at Rivesville. While digging through heavy clay soil they were astonished to uncover three giant skeletons [with] strands of reddish hair clinging to the skulls. A local doctor was called to examine the remains. The doctor was able to ascertain after careful measurement that the skeletons were approximately eight feet in length. “There have been many historical references to a mystic race of giant red-haired humans inhabiting this continent in the distant past.”

Report by the San Diego Union

According to the San Diego Union, August 5, 1947, the mummified remains of giants were discovered buried near the Arizona-Nevada-California wasteland. The giants’ remains were still clothed in strange garments. The team of explorers tentatively dated the remains as nearly 18,000 years old.

The year was 1931 and a retired Cincinnati doctor, F. Bruce Russell, accidentally found several tunnels located near Death Valley. Unable to return to the area until 1947, he solicited the assistance of Dr. Daniel S. Bovee – the man who had revealed New Mexico’s cliff dwellings to the world via several lengthy articles appearing in National Geographic Magazine. With Dr. Bovee’s help, Dr. Russell recovered the remains of several giants with heights ranging from eight to nine feet.

“These giants,” said Hill, “are clothed in garments consisting of a medium length jacket and trouser extending slightly below the knees. The texture of the material is said to resemble gray dyed sheepskin, but obviously it was taken from an animal unknown [to us] today.”

Who were these mysterious people that roamed America long before the Woolly Mammoths became extinct? Were they our ancestors or another race of humans like the Neanderthals? Some researchers notice strong similarities with large brained Cro-magnon man.

Not much more is known about these giants of North America beyond what I’ve shared here except for one more interesting fact. About twenty years ago in northern China a university’s archaeological dig stumbled upon the burial grounds of twenty-two strange, gigantic men. Each giant had once stood over ten feet high and each was garbed in strange leather armor; around their skulls hung long strands of hair. . . Red hair.