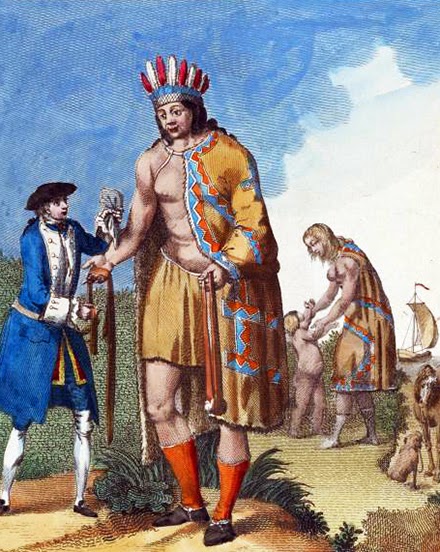 The civilized World's first account of the Patagonian Giants is derived from the records of famous explorer Ferdinand Magellan. Magellan never committed to paper his account of his voyage, as he was killed in Battle in the Philippines, long before his ship returned to Europe. Of 260 men who set out with Magellan in 1519, only 18 returned. Antonio Pigafetta was among the survivors.

"We passed two months in that place without seeing anyone. One day we suddenly saw a naked man of giant stature on the shore of the port. The captain-general sent one of our men to the giant, the man led the giant to an islet where the captain-general was waiting. When the giant was in the captain-general’s and our presence he marveled greatly, and made signs with one finger raised upward, believing that we had come from the sky. He was so tall that we reached only to his waist, he was well proportioned" 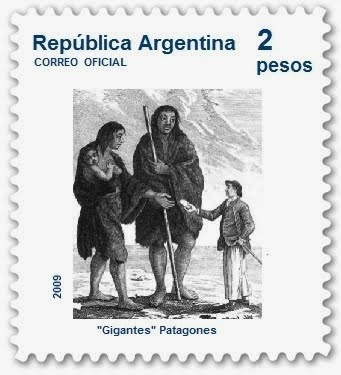 "His face was large and painted red all over, while about his eyes he was painted yellow. His scanty hair was painted white. He was dressed in the skins of animals skillfully sewn together. His feet were shod with the same kind of skins which covered his feet in the manner of shoes. In his hand he carried a short, heavy bow, with a cord somewhat thicker than those of the lute, and made from the intestines of the same animal, and a bundle of rather short cane arrows feathered like ours, and with points of white and black flint stones in the manner of Turkish arrows, instead of iron. Those points were fashioned by means of another stone."

"Magellane was not altogether deceived, in naming them Giants; for they generally differ from the common sort of men, both in stature, bignes, and strength of body, as also in the hideousnesse of their voice: but yet they are nothing so monstrous, or giantlike as they were reported; there being some English men, as tall, as the highest of any that we could see, but peradventure, the Spaniards did not thinke, that ever any English man would come thither, to reprove them; and thereupon might presume the more boldly to lie: the name Pentagones, Five cubits viz. 7. Foote and halfe, describing the full height (if not some what more) of the highest of them. But this is certaine, that the Spanish cruelties there used [referring to Magellan’s hostage taking], have made them more monstrous, in minde and manners, then they are in body; and more inhospitable, to deale with any strangers, that shall come thereafter."

He reduced the height of the Patagonians from ten feet to seven and a half feet but was obviously more intent on discrediting the Spanish and blaming them for the “monstrosity” of the giants. Ironically, though, he was really confirming the basic facts behind the myth.

In the 1700s, the myth was still alive and entertaining Europeans. Horace Walpole, the English historian and gothic novelist, published An Account of the Giants Lately Discovered: In a Letter to a Friend in the Country following the return in 1766 of Captain John Byron, who had circumnavigated the world in the HMS Dolphin. Word leaked that the crew had seen nine-foot giants in South America. Byron’s May docking and Walpole’s July publication suggests the rapidity with which rumors passed along the London grapevine. In his thirty-one-page pamphlet, Walpole satirizes the whole idea and facetiously suggests that a limited number of the giant women could be imported “for the Sake of mending our Breed.” The official account of Byron’s voyage, appearing in 1773, finally debunks the myth, but not without respecting the Patagonians’ vertical features:

"When we came within a little distance from the shore, we saw, as near as I can guess, about five hundred people, some on foot, but the greater part on horseback. . . . [O]ne of them, who afterwards appeared to be a Chief, came towards me: he was of a gigantic stature, and seemed to realize the tales of monsters in a human shape. . . . [I]f I may judge of his height by the proportion of his stature to my own, it could not be much less than seven feet. . . . Mr. Cumming [one of Byron’s officers] came up with the tobacco [a gift], and I could not but smile at his astonishment which I saw expressed in his countenance, upon perceiving himself, though six feet two inches high, become a pigmy among giants; for these people may indeed more properly be called giants than tall men . . . the shortest of whom were at least four inches taller." 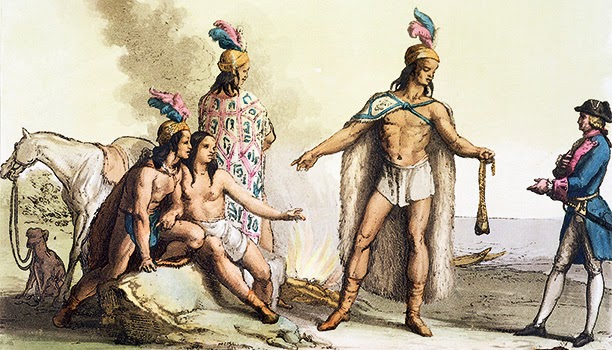 Lost City of 'Cloud People' Found in Peru - Species with Amnesia: Our Forgotten History
Posted by Atlantean Gardens at 10:31 PM