The Book of Enoch - ROBERT SEPEHR

The Book of Enoch is an ancient Jewish religious work, ascribed by tradition to Enoch, the great-grandfather of Noah, although modern scholars estimate the older sections (mainly in the Book of the Watchers) to date from about 300 BC, and the latest part (Book of Parables) probably to the end of the first century BC.

The authors of the New Testament were familiar with the content of the story and influenced by it: a short section of 1 Enoch (1 En 1:9 or 1 En 2:1 depending on the translation) is quoted in the New Testament (Letter of Jude 1:14–15), and is attributed there to "Enoch the Seventh from Adam" (1 En 60:8). The text was also utilized by the community that originally collected the Dead Sea Scrolls.

And it came to pass when the children of men had multiplied that in those days were born unto them beautiful and comely daughters. And the angels, the children of the heaven, saw and lusted after them, and said to one another: 'Come, let us... choose us wives from among the children of men and beget us children.' And Semjâzâ, who was their leader, said unto them: 'I fear ye will not indeed agree to do this deed, and I alone shall have to pay the penalty of a great sin.' And they all answered him and said: 'Let us all swear an oath, and all bind ourselves by mutual imprecations not to abandon this plan but to do this thing.' Then sware they all together and bound themselves by mutual imprecations upon it. And they were in all two hundred; who descended in the days of Jared on the summit of Mount Hermon, and they called it Mount Hermon, because they had sworn and bound themselves by mutual imprecations upon it. And all the others together with them took unto themselves wives, and each chose for himself one, and they began to go in unto them and to defile themselves with them, and they taught them charms and enchantments, and the cutting of roots, and made them acquainted with plants. And they became pregnant, and they bare great giants, whose height was three thousand ells: Who consumed all the acquisitions of men. And when men could no longer sustain them, the giants turned against them and devoured mankind. And they began to sin against birds, and beasts, and reptiles, and fish, and to devour one another's flesh, and drink the blood. Then the earth laid accusation against the lawless ones.

- The Book of Enoch

Fallen Angels, Giants, and the Nephilim - Species with Amnesia 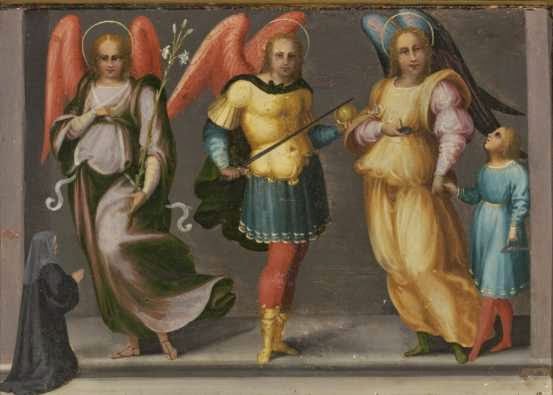 Posted by Atlantean Gardens at 7:39 AM