Out of Atlantis, NOT Out of Africa - ROBERT SEPEHR 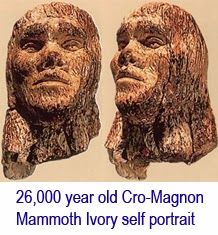 Since Cro Magnon Man was first discovered in 1868, he has presented fundamental puzzles for traditional scientists. Today there is still no solution in sight for the traditional anthropologists.

Cro Magnon Man appeared abruptly in Europe and North America, starting from around 35,000 years ago, lasting to about 12,000 years ago.

The first recognized discovery of a Cro Magnon was in 1868, only 20 years before the Secret Doctrine was written by Madam Blavatsky.


Blavatsky quotes a man of science as saying:

"On the contrary, one of the oldest types, that of the men of the cave of Cro-Magnon, is that of a fine race, tall in stature, large in brain, and on the whole superior to many of the existing races of mankind."

The scientist is quite right. Skull types are known after the name of the place where they are first discovered and Cro Magnon was discovered in a cave in France. He is still considered by scientists today to be taller and larger brained than the average human living today.

The first puzzle causes these physical characteristics to be not pleasant for the anthropologist. To fit in more gracefully with their theories, Cro Magnon should have been shorter and smaller brained than the average for humans today.
A second and major puzzle for anthropologists is that Cro Magnon man appears to arrive with his culture from no discernable origin. He does not show any discernable development. His culture was distinctly superior to others around him. This could be seen clearly in the nature of his tools. 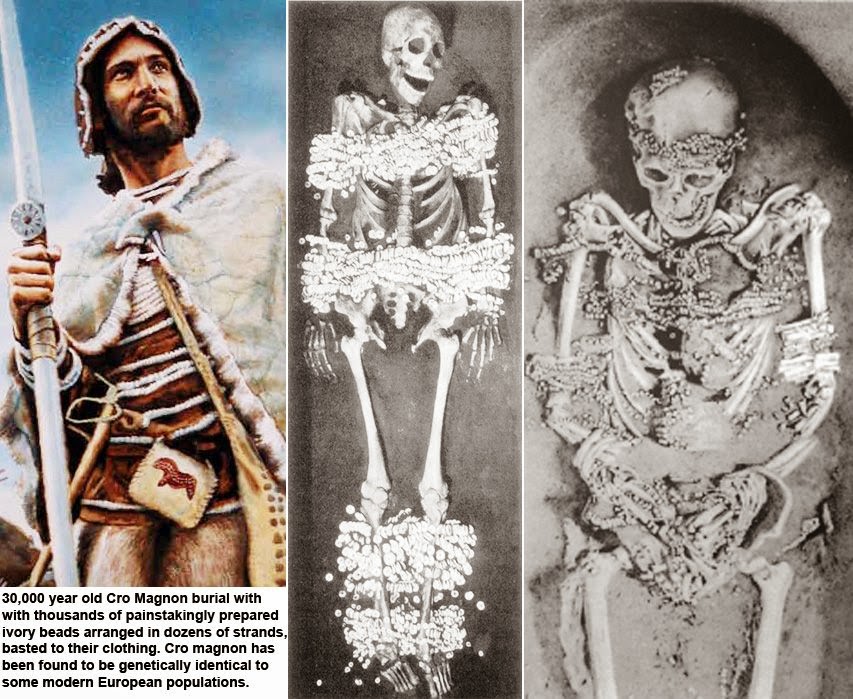 His art work was also seen to be superior. He painted those fantastic cave walls that we hear about and his advanced culture does not appear to come from any source that we can identify.

The advanced culture of Cro magnon gives all the appearance of arriving from elsewhere already fully developed.
Notice the relatively modern-looking, tailored clothing with sewn arms and legs. Also shoes and a hat!

Cro-Magnon Men are sometimes depicted as clean-shaven, and even playing musical instruments.

These 'cave men' also had houses! We do not know what exactly they were made of but we do have the post holes. It's becoming easier to see by now that the Cro magnon specimen is becoming undesirable from the view point of traditional politically correct science.

To help demonstrate this yet more emphatically, here are a series of quotes showing the "developed somewhere else" nature of Cro Magnon culture:

According to Prof. Francois Bordes, world renown archeologist and former director of the Laboratory of Prehistory at the University of Bordeaux, the Aurignacian [Cro Magnon] tool tradition without doubt originates outside of Europe, ready-made, although from where is still a mystery (Bordes, 1968).

Dr. John E. Pfeiffer, professor of anthropology at Rutgers University observes: "The Aurignacian is quite distinct from the Parigordian" [a separate older European style]; they arrive "from some area outside of Western Europe"; with an already "established way of life."

Archeologist Frank Hibben states that the Aurignacian industry is "indubitably non-European in origin";

These "invasions" are all associated with waves of Cro-Magnon occupation. No formative, or "gestation," stages have ever been found on any continent for any of the Cro-Magnon tool industries.

Professional anthropologists haven't the foggiest idea of the origin of these invasions. They invariably appeared on the western shores of Europe and Africa, even including some of the Atlantic isles next to those continents. Always the sites are clustered in the west, the number of sites diminishing towards the east [with an exception in the Levant]. Combe Capelle sites [of more ancient European man] are more or less evenly distributed all over Europe and the Near East. This has been a mystery that has plagued anthropologists for over a hundred years. To the west, there is nought but empty ocean: how could the invasions come from there?

The mystery of these invasions has been so embarrassing that today anthropologists don't want to talk about it any more. Some have gotten around the problem by blurring the distinction between true "Atlantic" Cro-Magnons and the "eastern" European types. Calling all modern men "Cro-Magnon," is merely skirting the issue; but this is not a scientific way to deal with the problem. (R. Cedric Leonard) 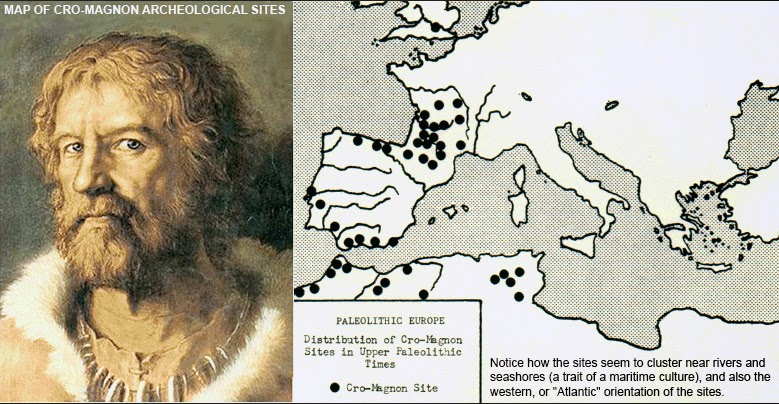 It shows the distribution in Europe as occurring in France, in the Pyrenees, along the Atlantic coast of Portugal, in southern coast of Spain on either side of the Straits of Gibraltar, in northern Morocco on the Atlantic and Mediterranean coasts and along rivers.

What a visual check of the map makes clear is that Cro Magnon sites hug the Western shores facing the Atlantic Ocean for Europe and northern Africa. And as referenced above, the number of sites thin out as one moves eastward. 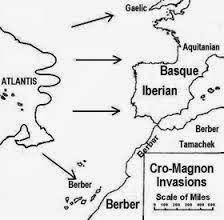 The Cro Magnon civilization came from the West, and arrived in "waves". They had developed their culture somewhere west from the Atlantic, and arrived fully developed when encountering Neanderthal occupied Europe.

Madam Blavatsky claimed that Atlantis was located in the Atlantic Ocean generally across from the same areas that are heavily populated by sites on that map.

For example, Blavatsky asserts a land connection in ancient days between Atlantis and North Africa:


What is now N.W. Africa was once connected with Atlantis by a network of islands, few of which now remain. (SDii790)

So then the conclusion is clear. Cro Magnon came from somewhere in the Atlantic, not sub-Saharan Africa, possibly the fabled Atlantis from which the Atlantic is said to have received its name.
Of course science can not place their origin. Their origin is not there any more. It sank below the rising sea levels, which have been rising since the ice age ended.  The polar caps have risen over 400 feet during the past 20,000 years, not just during the industrial revolution of the last two centuries. 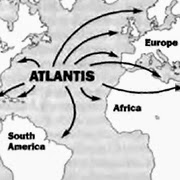 So it would come as no surprise that their culture was higher than those around them when one realizes that it came from the territory Plato described as Atlantean.  Unfortunately, since WW2 it has become politically incorrect to propose any alternative to the currently accepted "out of Africa" hypothesis.


Now there is one more key location of Cro Magnon man - that is, the Canary Islands. The aboriginals of the Canary Islands, before Spain discovered the island and destroyed most of their populace, were called Guanches. Science recognizes that the Guanches were Cro Magnon.


Today, due to some intermarriage, some traits of the Cro Magnon still atavistically appear - individuals will sometimes be taller and blond with blue eyes. Mostly the culture of the Guanches was wiped out. However, some mummies remain and as shown later some valuable information will be gleaned from those mummies.
The distribution map shows sites in northern Morocco. Those are today the Berbers. The Tuaregs are also a Berber speaking group that is nomadic. Science recognizes that the Berbers are also descended from Cro Magnon man.

The Berbers were in North Africa long before the Arabs arrived. The Berbers are considered the aboriginals of the area and their origins beyond that are not known. From a traditional source:


Despite a history of conquests, the Berbers retained a remarkably homogeneous culture, which, on the evidence of Egyptian tomb paintings, derives from earlier than 2400 B.C. The alphabet of the only partly deciphered ancient Libyan inscriptions is close to the script still used by the Tuareg. The origins of the Berbers are uncertain, although many theories have been advanced relating them to the Canaanites, the Phoenicians, the Celts, the Basques, and the Caucasians. In classical times the Berbers formed such states as Mauritania and Numidia.

Leonard establishes a point that the influence of Atlantis was likely global:

So why bother with this obscure and out-of-the-way outpost [in the Levant: Lebanon, Israel, and Palestine]? I am convinced that, at least toward the end, the Atlantean civilization was an empire. From the evidence uncovered, there were outposts, not only in the Levant, but also on the Atlantic seaboard of Africa, the Canary Islands, in northern France, in Egypt, the Bahama Islands, in Peru and Bolivia, and possibly even Antarctica. 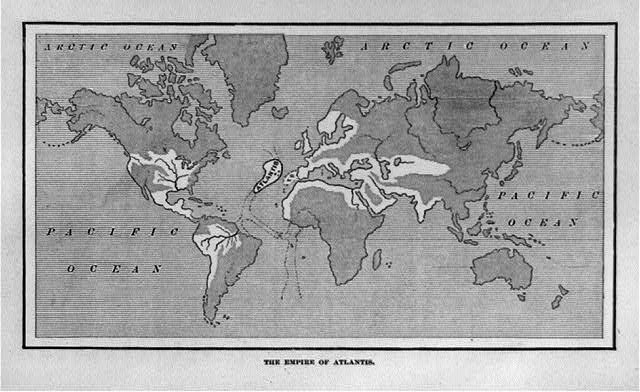 The Basques are in the Pyrenees and are said to derive from the Cro Magnon. The Guanches are the now deceased aborigines of the Canary Islands and are of Cro Magnon descent.

The Atlanteans likely moved both to South France and to the Guanches in the Atlantic Ocean, as is described by Professor Retzius in the "Smithsonian Report":

"With regard to the dolichocephalic trait [those who have a head unusually long (front to back) relative to width (as do Cro Magnon)] of America, I entertain a hypothesis still more bold, namely, that they are nearly related to the Guanches of the Canary Islands, and to the Atlantic populations of Africa, Tuaricks, Copts, which Latham comprises under the name of Egyptian-Atlantidæ. We find one and the same form of skull in the Canary Islands, in front of the African coast, and in the Carib islands, on the opposite coast which faces Africa." (Professor Retzius, "Smithsonian Report," 1859, p. 266.) 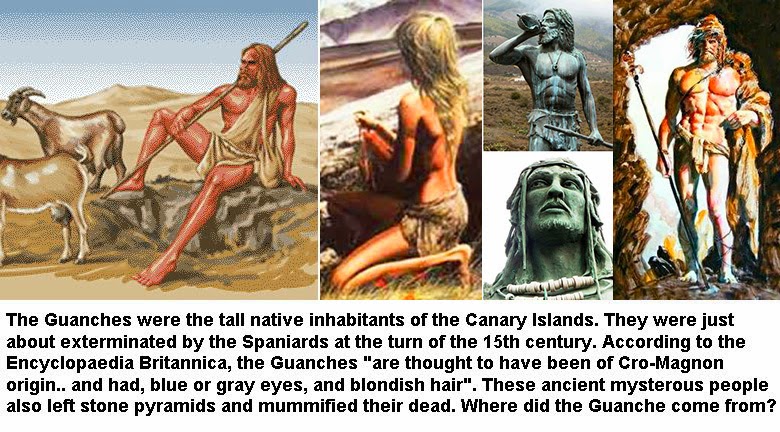 (The Tuaricks mentioned in the above paragraph are the Tuaregs mentioned still earlier as descended from the Cro Magnons.) Madam Blavatsky seems to be in agreement:

If, then, Basques and Cro-Magnon Cave-Men are of the same race as the Canarese Guanches, it follows that the former are also allied to the aborigines of America. This is the conclusion which the independent investigations of Retzius, Virchow, and de Quatrefages necessitate. The Atlantean affinities of these three types become patent. (SDii791)

Here she says it again in shorter form:

A race which MM. de Quatrefages and Hamy regard as a branch of the same stock whence the Canary Island Guanches sprung-offshoots of the Atlanteans, in short. (SDii678)

Here she is quite clear:

The Guanches of the Canary Islands were lineal descendants of the Atlanteans. This fact will account for the great stature evidenced by their old skeletons, as well as by those of their European congeners the Cro-Magnon Palæolithic men. (SDii791)

And finally, she claims all of European paleolithic man as Atlantean:

Palæolithic European man of the Miocene and Pliocene times was a pure Atlantean, as we have previously stated.

The Basques are, of course, of a much later date than this, but their affinities, as here shown, go far to prove the original extraction of their remote ancestors. (SDii790)
“Out of Africa” Theory Officially Debunked
Posted by Atlantean Gardens at 7:10 AM