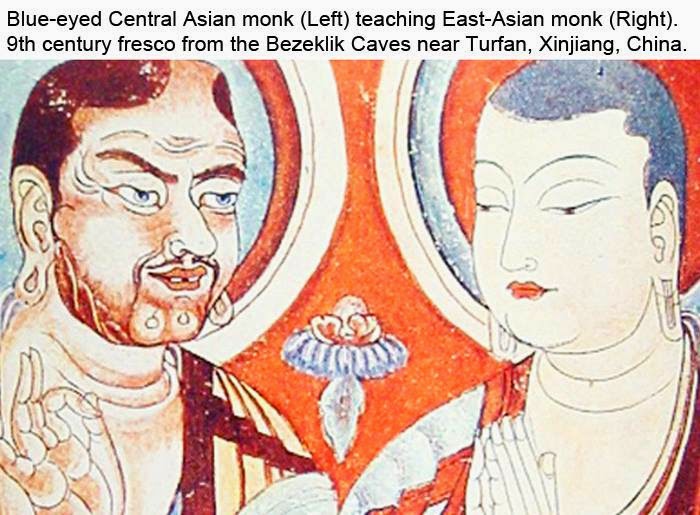 Bodhidharma was a Buddhist monk who lived during the 5th/6th century. He is credited as the transmitter of Zen Budhism to China and regarded as its first Chinese patriarch.
According to Chinese legend, he also began the physical training of the Shaolin monks that led to the creation of Shaolinquan.

The Anthology of the Patriarchal Hall identifies Bodhidharma as the 28th Patriarch of Buddhism in an uninterrupted line that extends all the way back to the Buddha himself. Throughout Buddhist art, he is depicted as profusely bearded with wide-eyes and is referred as "The Blue-Eyed Barbarian" in Chinese Chan texts.

New archeological finds in China are forcing a re-examination of old Chinese books that describe historical or legendary figures of great height, with deep-set blue or green eyes, long noses, full beards, and red or blond hair. Scholars have traditionally scoffed at these accounts, but it now transpires that these accounts were correct. Many people are unaware of the fact that China has massive pyramids that rival Egypt in size and age.

China's landscape is not only littered with enormous pyramids, but hundreds of ancient blond mummies with Caucasoid features. The discoveries in the 1980s of the undisturbed 4,000-year-old ”Beauty of Loulan” and the younger 3,000-year-old body of the ”Charchan Man” are legendary in world archaeological circles for the fine state of their preservation and for the wealth of knowledge they bring to modern research. 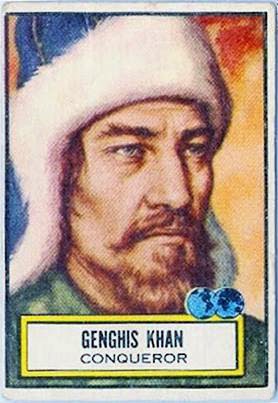 The ancestral mother and founder of this clan was known as Alan goa (beautiful Alan). According to the Mongol and Chinese legends on the subject, she was said to have been visited in her tent by a divine being, who possessed golden hair, a fair complexion and grey eyes. Shortly after this visitation, she gave birth to the first member of the Bourchikoun clan.


Temujin's relatives and descendants also possessed fair features: Temujin's son and successor Ogadei, had gray eyes and red hair; Temujin's grandson Mangu, had reddish eyebrows and a red-brown beard; Subatei, who conquered China, had a long, reddish beard. Indeed, it was said that people were surprised Kubilai Khan had dark hair and eyes, because most of Genghis Khan's descendants had reddish hair and blue eyes.

Banned Occult Secrets of the Vril Society
Posted by Atlantean Gardens at 2:46 PM