A mysterious set of massive monuments in Peru make up the oldest solar observatory in the Americas, according to a new study. The 2,300-year-old Thirteen Towers of Chankillo were used for marking the sun's position throughout the year—an activity that was part of the sun-worshipping culture of the Inca, scientists recently announced. 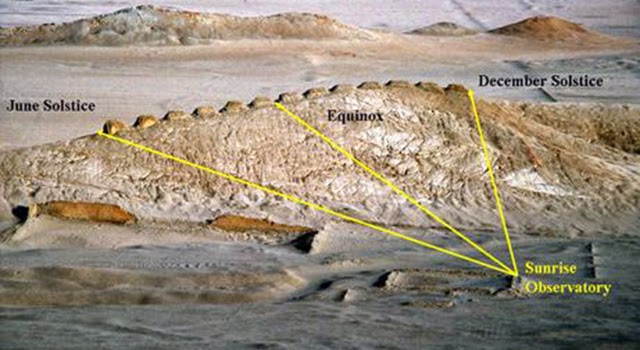 The large stone towers are arranged in a line along a ridge near Chankillo, a walled hilltop ruin north of Lima. "This is the oldest known example of landscape timekeeping in the Americas," said Ivan Ghezzi, lead author of the study and an archaeologist at the Pontifical Catholic University of Peru. Ghezzi and archaeo-astronomer Clive Ruggles of the University of Leicester, England, report their findings in a recent issue of the journal Science. 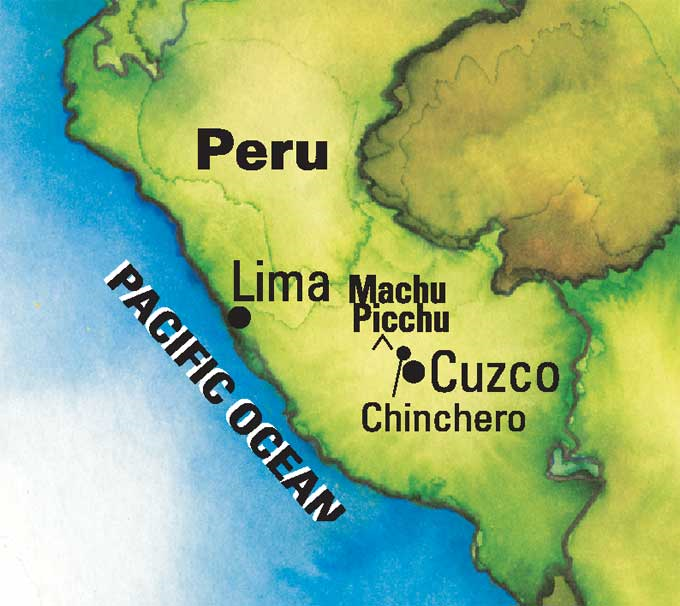 The Inca civilization, which took power in the region around A.D. 1200, are known to have kept track of the positions on the horizon where the sun rose and set. Writings by Spanish conquerors describe the Inca's methods of tracking these positions using sets of pillars.

But nearly all of these markers were apparently destroyed in a campaign to undermine the Inca Empire in the mid- to late 1500s.
"Astronomy was the backbone of the political and ideological system that supported the authority of the Inca rulers," Ghezzi said.
The Chankillo site appears to have been used only from about 300 B.C. to A.D. 1, meaning that an unidentified pre-Inca culture built the monuments. Only one similar site in the Americas had been spotted so far, on the Island of the Sun in Lake Titicaca, on the border between Bolivia and Peru.

"Now we know how far back the solar cult goes," Ghezzi said. "What the documents are telling us about the Incas [using pillars to track the sun] is correct." The Chankillo towers vary from 7 to 20 feet (2 to 6 meters) high. But they are as precisely spaced as the teeth of a comb—roughly 15 feet (5 meters) apart. They seem to be marking regular divisions of the year for a solar calendar, the study authors said. 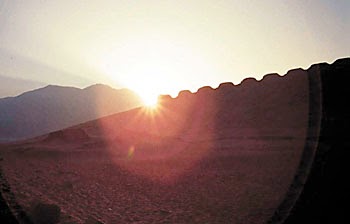 The scientists also found that one of the nearby buildings had an odd architectural feature: a 131-foot-long (40-meter-long) corridor running along the side that lacked any windows or doors into the main building.
"The best explanation for that architectural space is it led people to an observation point to have a full view of the towers," Ghezzi said.
Throughout the year, the points along the horizon where the sun rises and sets trace an arc. In Peru the sun rises and sets farthest north on the longest day of the year, the winter solstice, and farthest south on the shortest day, the summer solstice.
Day and night are roughly equal in length during the autumnal and vernal equinoxes. Only from the vantage point at the opening of the corridor do the towers precisely span the solar arc. It appears the opening of this corridor was a ceremonial site where people made offerings, since the researchers found a variety of artifacts ritually buried there.

There also appears to be another observation spot on the other side of the ridge for watching the setting sun. "Individuals with the status to access [these observation spots] and conduct ceremonies would have had the power to regulate time, ideology, and the rituals that bound this society together," Ghezzi and Ruggles wrote in their paper.
David Dearborn, a physicist at Lawrence Livermore National Laboratory in California who studies ancient astronomy, called the new study "a very credible case."  "With the abundant evidence for Inca interest in astronomy, and for its use in social organization, archaeologists have long suspected that earlier cultures also may have engaged in such activities," he said. "Finally, in this work, material evidence is presented that strongly supports such suspicions."

Brian Bauer, an archaeologist at the University of Illinois in Chicago, agreed. "There are various announcements like this every year, but most of them are not very rigorous," Bauer said. "I found this [study] very, very convincing," he added. "It ties in with what we already knew about the Incas. "It shows they were both using a solar calendar and [that] the solstices were used to mark the beginning and end of the year. Because it was being carefully observed, there were probably large rituals associated with this."

Other researchers have made claims of ancient observation sites in the Americas, some of which would outdate Chankillo. Last May, for example, Robert Benfer of the University of Missouri and colleagues announced their discovery of the oldest astronomical observatory in the Western Hemisphere at another site near Lima. The so-called Buena Vista site dates back 4,200 years—making it 1,900 years older than the Chankillo site.

Ancient Pre-Inca Royal Tomb Found in Peru
Posted by Atlantean Gardens at 7:35 AM