The similarity between other later east coast US and European Stone Age stone tool technologies has been noted before. But all the US European-style tools, unearthed before the discovery or dating of the recently found or dated US east coast sites, were from around 15,000 years ago - long after Stone Age Europeans (the Solutrean cultures of France and Iberia) had ceased making such artifacts. 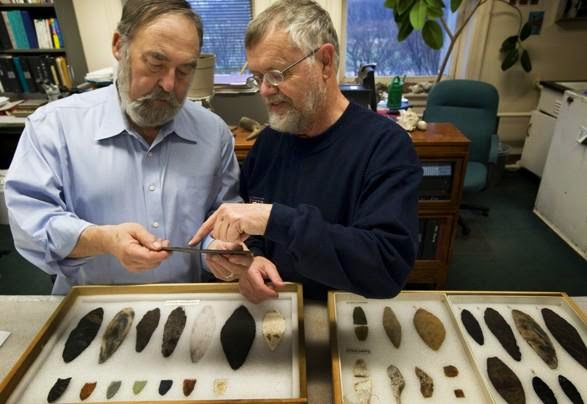 Most archaeologists had therefore rejected any possibility of a connection. But the newly-discovered and recently-dated early Maryland and other US east coast Stone Age tools are from between 26,000 and 19,000 years ago - and are therefore contemporary with the virtually identical western European material.

What’s more, chemical analysis carried out last year on a European-style stone knife found in Virginia back in 1971 revealed that it was made of French-originating flint. 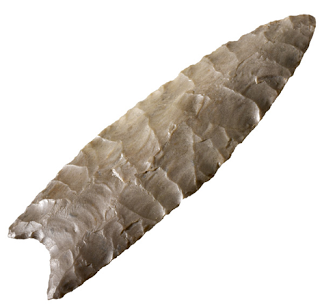 Professor Dennis Stanford, of the Smithsonian Institution in Washington DC, and Professor Bruce Bradley of the University of Exeter, the two leading archaeologists who have analysed all the evidence, are proposing that Stone Age people from Western Europe migrated to North America at the height of the Ice Age by travelling (over the ice surface and/or by boat) along the edge of the frozen northern part of the Atlantic. They are presenting their detailed evidence in a new book - Across Atlantic Ice – published this month.

At the peak of the Ice Age, around three million square miles of the North Atlantic was covered in thick ice for all or part of the year.

However, the seasonally shifting zone where the ice ended and the open ocean began would have been extremely rich in food resources – migrating seals, sea birds, fish and the now-extinct penguin-like species, the great auk.

Stanford and Bradley have long argued that Stone Age humans were quite capable of making the 1500 mile journey across the Atlantic ice - but till now there was comparatively little evidence to support their thinking.

But the new Maryland, Virginia and other US east coast material, and the chemical tests on the Virginian flint knife, have begun to transform the situation. Now archaeologists are starting to investigate half a dozen new sites in Tennessee, Maryland and even Texas – and these locations are expected to produce more evidence. 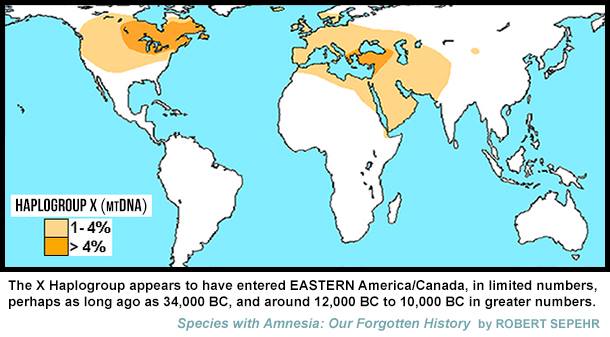 Another key argument for Stanford and Bradley’s proposal is the complete absence of any human activity in north-east Siberia and Alaska prior to around 15,500 years ago. If the Maryland and other east coast people of 26,000 to 19,000 years ago had come from Asia, not Europe, early material, dating from before 19,000 years ago, should have turned up in those two northern areas, but none have been found.

Although Solutrean Europeans may well have been the first Americans, they had a major disadvantage compared to the Asian-originating Indians who entered the New World via the Bering Straits or along the Aleutian Islands chain after 15,500 years ago.

Whereas the Solutreans had only had a 4500 year long ‘Ice Age’ window to carry out their migratory activity, the Asian-originating Indians had some 15,000 years to do it. What’s more, the latter two-thirds of that 15 millennia long period was climatologically much more favorable and substantially larger numbers of Asians were therefore able to migrate. 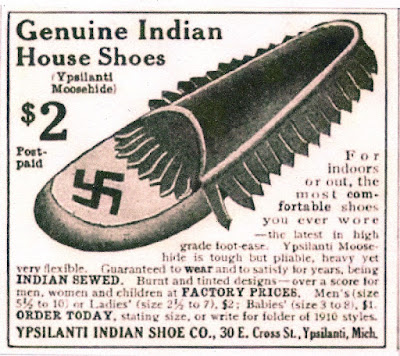 As a result of these factors the Solutrean (European originating) Native Americans were either partly absorbed by the newcomers or were substantially obliterated by them either physically or through competition for resources.

Some genetic markers for Stone Age western Europeans simply don’t exist in north- east Asia – but they do in tiny quantities among some north American Indian groups. Scientific tests on ancient DNA extracted from 8000 year old skeletons from Florida have revealed a high level of a key probable European-originating genetic marker.

There are also a tiny number of isolated Native American groups whose languages appear not to be related in any way to Asian-originating American Indian peoples.

But the greatest amount of evidence is likely to come from under the ocean – for most of the areas where the Solutreans would have stepped off the Ice onto dry land are now up to 100 miles out to sea.

The one underwater site that has been identified - thanks to the scallop dredgers – is set to be examined in greater detail this summer – either by extreme-depth divers or by remotely operated mini submarines equipped with cameras and grab arms.

Legendary Pre-Flood Civilizations ♥ Planet X Nibiru and the Anunnaki ♥ Species with Amnesia
Posted by Atlantean Gardens at 10:53 AM