Located in central Kentucky and covering well over 52,000 acres, the Mammoth Cave was established as a national park in 1941, and as a World Heritage Site in 1981. With a staggering 400 miles (640 km) of surveyed passageways, Mammoth Cave is by far the world's longest known cave system, over twice as long as the second-longest cave system, Mexico's Sac Actun underwater cave. Archeologists are constantly making new discoveries and additional connections in this cave system, adding several miles to this figure each year. 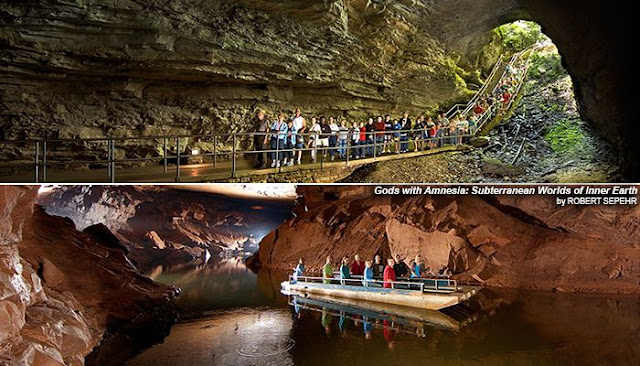 The Echo River Tour, one of the cave's most famous attractions, took visitors on a boat ride along an underground river, but the tour was discontinued in the early 1990s. There are rumors of deep passageways not accessible to tourists. 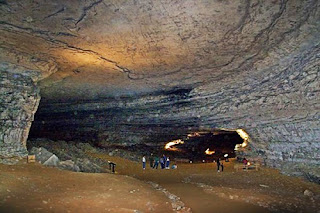 H.P. Lovecraft's short story, The Beast in the Cave, is set in Mammoth Cave. He finished the final draft in 1905, when he was fourteen, and published it in the June 1918 issue of the amateur press journal, The Vagrant.

The plot involves a man on a tour of Mammoth Cave who separates from his guide and becomes lost. His torch finally expires, leaving him hopeless of finding a way out in the pitch dark. He then hears strange sounding footsteps approaching. Thinking it a lost mountain lion, he desperately throws a stone at the source of the sound. The beast is hit and crumples to the floor.


The guide eventually finds the protagonist, and together they examine the fallen creature with the guide's torchlight. As the creature mutters its last breaths, revealing its face, they discover that it is a pale, deformed human, who actually had lived in the caves for years. 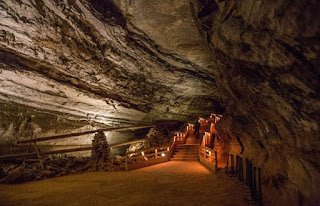 Several sets of Native American remains have been recovered from Mammoth Cave. Many of these mummified remains indicate intentional pre-Columbian funerary practice. Another fascinating discovery was the remains of cane torches used by Native Americans. Could there have been civilizations that took rfuge deep inside these massive caverns? What are the mysteries involving subterranean passages to inner earth?

Author and anthropologist, Robert Sepehr, explores these questions and attempts to unlock their riddles, which have eluded any serious consideration in mainstream academia.