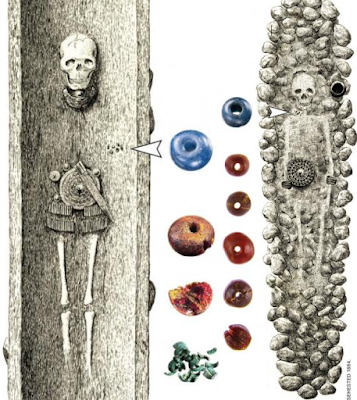 The eye of Horus, the so-called Wedjat Eye, is always blue.  In the Book of the Dead, the eyes of the god Horus are described as "shining," or "brilliant," whilst another passage refers more explicitly to "Horus of the blue eyes". The rubric to the 140th chapter of said book, states that the amulet known as the "Eye of Horus," (used to ward-off the "Evil Eye"), must always be made from lapis-lazuli, a mineral which is blue in color. It should be noted that the Goddess Wadjet, who symbolized the Divine Eye of Horus, was represented by a snake (a hooded cobra to be precise), and her name, when translated from the original Egyptian, means "blue-green".
Interestingly, the ancient Scandanavians claimed that anyone who was blue-eyed (and therefore possessed the power of the Evil Eye), had "a snake in the eye," and blue eyes were frequently compared to the eyes of a serpent. In the ancient Pyramid Texts, the Gods are said to have blue and green eyes. The Graeco-Roman author Diodorus Siculus, says that the Egyptians thought the goddess Neith had blue eyes.
READ: Species with Amnesia: Our Forgotten History
﻿
Posted by Atlantean Gardens at 4:56 AM