New Swabia (Neuschwabenland) and Base 211 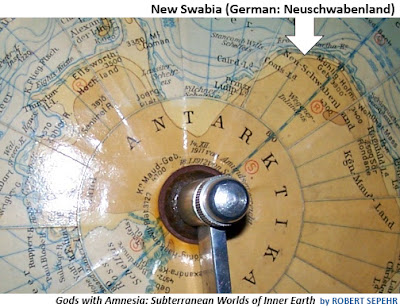 New Swabia (Neuschwabenland) is an area of Antarctica between 20°E and 10°W in Queen Maud Land. It was explored by the German Antarctic Expedition which discovered ice-free areas with warm fresh-water lakes and vegetation. In 1943, German Navy Grand Admiral Karl Dönitz stated: "The German submarine fleet is proud of having built for the Führer in another part of the world a Shangri-La on land, an impregnable fortress."

While it is widely accepted that the Nazis were defeated with the German Government's formal surrender in 1945, this is only partly true. The media is largely controlled by the Rothschild banking dynasty, and has promoted a false narrative concerning the events of WW2.
Hitler's body was never recovered, and no Nazi party member ever signed any documents of surrender. That is why, after the Allies claimed unconditional victory, Secretary of Defense James Forrestal sent a naval task force, called “Operation Highjump,” to Antarctica, including Admiral Nimitz, Admiral Krusen and Admiral Byrd. Over 4,700 military troops from the U.S., Britain and Australia, consisting of three Naval battle groups departed on December 2, 1946. 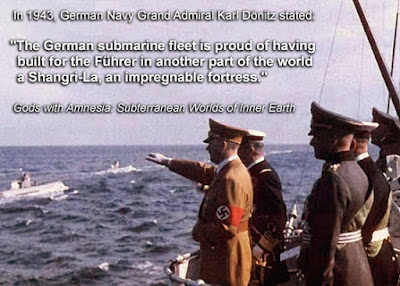 The US military and intelligence were apparently trying to locate the immense underground facility constructed by the Germans, before, during and immediately after the Second World War (Section-211). The base was likely used to further their research and successful development of advanced propulsion technology, based on free energy.
According to first hand testimonials from crew members participating in Operation Highjump, including an interview given by Admiral Byrd himself, the Antarctic Nazis developed their saucer-shaped discs far in advance of anything possessed by the U.S. They swiftly defeated the massive "post WW2" Allied military attack.
Top Secret maps obtained by the KGB and belonging to the Third Reich have been leaked on the internet which allegedly depict passages under the Antarctic ice used by German U-Boats to access underground polar caverns. 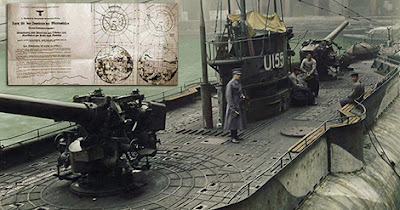 The possibility that the earth contains massive subterranean caverns, or is at least partially hollow, that these regions are accessible through passages at the poles, and that ancient secret breakaway civilizations flourish within them, has renewed people's interest in a subject still considered by the media to be taboo. Could the Earth really have entire inhabited cities underground that we are unaware of on the surface? Where are the entrances to inner earth, and which races live on the inside?


The idea that our planet consists of a hollow, or honeycombed, interior is not new. Some of the oldest cultures speak of civilizations inside of vast cavern-cities, within the bowels of the earth. According to certain Buddhist and Hindu traditions, secret tunnels connect Tibet with a subterranean paradise, and they call this legendary underworld Agartha. In India, this underground oasis is best known by its Sanskrit name, Shambhala, thought to mean 'place of tranquility.' Mythologies throughout the world, from South America to the Arctic, describe numerous entrances to these fabled inner kingdoms. Many occult organizations, esoteric authors, and secret societies concur with these myths and legends of subterranean inhabitants, who are the remnants of antediluvian civilizations, which sought refuge in hollow caverns inside the earth.
Assuming that the myths are true, and the Earth is partially hollow, how could life survive underground? How would organisms receive the ventilation required to breathe miles below the surface? What would provide the light needed to see, or to cause the photosynthesis necessary for the plant life that allegedly exists in these inner worlds? Are there any known sources of sustenance available that could provide for a large human population?
Author and anthropologist, Robert Sepehr, explores these questions and attempts to unlock their riddles, which have eluded any serious consideration in mainstream academia. Numerous endevours have been undertaken to access the interior of the earth. Polar expeditions and battles, such as Operation Highjump, still remain largely classified, and have been shrouded in secrecy for decades, but scientific revelations validating the rumors surrounding these covert events, and their implications, are finally being exposed to daylight. What are the mysteries of inner Earth?

READ: Gods with Amnesia: Subterranean Worlds of Inner Earth
Posted by Atlantean Gardens at 10:03 AM