Legend of the War of the Pygmies - ROBERT SEPEHR 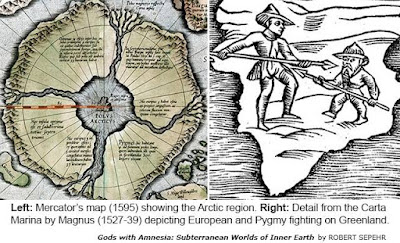 Just as Plato wrote about the “mythical” Atlantis, a continent which was said to be once located above sea level in the Atlantic, Herodotus wrote about the legendary Hyperborean continent which he said once existed in the far North. On the left is Mercator's map (1595), which not only depicts what could very well be the remnants of Hyperborea, but it also seem to imply that a race of Pygmies once heavily populated the northern Canadian and Arctic regions where four rivers intersect. On one of the large islands featured in the center of this Arctic map, it is clearly written in the legend:

Who were these people that are mentioned with a supposed height of merely 4 feet, and where did they come from? On the back of the Mercator map a legend reads:

"The waters of these 4 arms of the sea were drawn towards the abyss with such violence that no wind is strong enough to bring vessels back again once they have entered; the wind there is, however, never sufficient to turn the arms of a corn mill.”


Written on the map, Mercator explains that the ocean waters rush inward towards the center, between the islands, to the pole, where they plunge deep into the Earth. On the right is a detail from the Carta Marina (Latin "map of the sea" or "sea map"), which was created in Rome and drawn by Swedish ecclesiastic Olaus Magnus in 1527-39. Magnus described the Pygmies of Greenland as small in stature, but big of heart. In regard to the Pygmies, Pliny the Elder (23-79 A.D.) tells us in Natural History:
“Beyond these in the most outlying mountain region we are told of the Three-span men and Pygmies, who do not exceed three spans, i.e. twenty-seven inches, in height; the climate is healthy and always spring-like, as it is protected on the north by a range of mountains; this tribe Homer has also recorded as being beset by cranes....”

Pliny the Elder noted that the Pygmies were believed to have been displaced from their ancestral homeland, and locates a remaining population of Pygmies somewhere mainly between Egypt and Ethiopia, though also having found a refuge as far afield as the Southeast of the North American continent.

The Cherokees, whose ancestral home was in the southeast of North America, have a legend which tells of a journey by some men, who traveled south until they came upon a tribe of very little people, the Tsundige’wi, who barely reached up to a man’s knee. These little men and women lived in nests in the sand, that were covered with dry grass, and they were terrified of the wild geese, which came in great flocks from the south and attacked them. 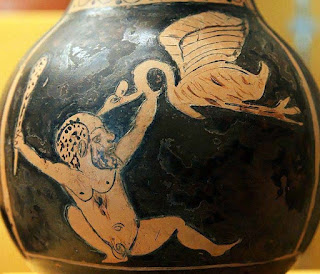 When the Cherokees arrived, the Tsundige’wi were in a state of great fear and anxiety, because the wind was blowing from the south, bringing with it some white feathers. This was a sure sign that the birds were not for away.
The Cherokees showed them new ways to defend themselves and how to use sticks and clubs so that they could hit the birds on their necks and kill them.

As the birds flew in from the south in great flocks, the little men ran to their nests to hide. But when the birds stuck their long beaks into the nests and began to pull out the men out to eat them, the men dashed out with their clubs and hit the birds as the Cherokees had shown. They killed so many that after a while the birds flew away.

For some time, the Tsundige’wi were able to keep the birds at bay, until eventually a flock of giant cranes arrived. These birds were much taller, and the little people weren’t able to strike them on their necks, and so unfortunately for the Tsundige’wi, they all perished. 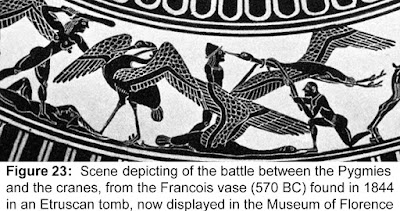 Arab scholars agree with the fourteenth century Italian missionary and explorer Friar Odoric about tales told in China concerning remnant populations of Pygmaei in the Himalayas.

According to the most ancient records from the Chinese, Scandinavians, Greeks, Romans, Arabs, and the Cherokee, we have an undeniable collective memory of an ancient, millennium long, and world-wide Pygmy war. The Pygmies were fractured, reduced to refugee status, and forced into exile.

What was the cause of this war? Are the myths and legends true? Author and anthropologist, Robert Sepehr, explores these questions and attempts to unlock their riddles, which have eluded any serious consideration in mainstream academia. READ: Gods with Amnesia: Subterranean Worlds of Inner Earth