In the year 2000, the “Cave of the Crystals” was discovered by miners excavating a tunnel for the Naica Mine in Mexico. The main chamber contains some of the largest natural crystals ever found in any underground cave, with the cave’s largest crystal found to date measuring at 36 ft (11 m) in length, 13 ft (4 m) in diameter and 55 tons in weight.

These spectacular crystals became so large because the extremely hot temperatures inside the cave, reaching a steamy 136 degrees Fahrenheit, encouraged microscopic crystals to form and rapidly grow. Gazing at these gigantic crystals, one can't help but get carried away imagining what else awaits further exploration of these cave systems. 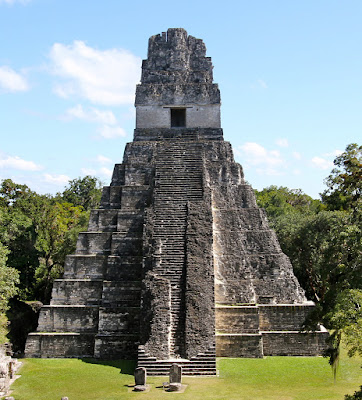 In Guatemala, archeologists have also discovered 800 km worth of tunnels which have been mapped underneath the Mayan pyramid complex at Tikal. Tikal is an ancient Mayan citadel in the rainforests of northern Guatemala. Its iconic ruins feature the massive, ceremonial Lost World Pyramid, the Temple of the Grand Jaguar. At 70 meters, Temple IV is the tallest pre-Columbian structure in the Americas. Could there be hidden passages built beneath the site? If so, who could have built them?
The idea that our planet consists of a hollow, or honeycombed, interior is not new. Some of the oldest cultures speak of civilizations inside of vast cavern-cities, within the bowels of the earth. According to certain Buddhist and Hindu traditions, secret tunnels connect Tibet with a subterranean paradise, and they call this legendary underworld Agartha. In India, this underground oasis is best known by its Sanskrit name, Shambhala, thought to mean 'place of tranquility.' Mythologies throughout the world, from South America to the Arctic, describe numerous entrances to these fabled inner kingdoms.

Many occult organizations, esoteric authors, and secret societies concur with these myths and legends of subterranean inhabitants, who are the remnants of antediluvian civilizations, which sought refuge in hollow caverns inside the earth. Assuming that the myths are true, and the Earth is partially hollow, how could life survive underground?

How would organisms receive the ventilation required to breathe miles below the surface? What would provide the light needed to see, or to cause the photosynthesis necessary for the plant life that allegedly exists in these inner worlds? Where are the entrances to inner earth, and which races live on the inside?
Author and anthropologist, Robert Sepehr, explores these questions and attempts to unlock their riddles, which have eluded any serious consideration in mainstream academia. What are the mysteries of inner Earth?

READ: Gods with Amnesia: Subterranean Worlds of Inner Earth
Posted by Atlantean Gardens at 4:16 AM