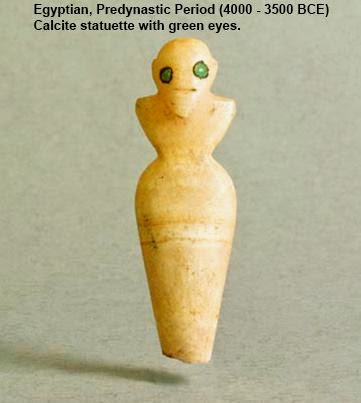 Dating almost 6,000 years to the Pre-dynastic period of ancient Egypt, this figure is of a man, with a shaven head and a long pointed beard.
There is little detail on the figure but what there is, is concentrated on the face, his eyes are inlaid with light green stones and are the most arresting part of the figure.
This is already typical of Egyptian art - they are obsessed with the eyes and more attention is usually given to them than almost any other aspect of a person. Louvre, Paris, France.
Archaeologists in Egypt have recently unearthed a beautiful  5,000+ year-old wooden statue, complete with gold wrapping paper and precious lapis lazuli stones as striking blue eyes, dated from Egypt's pre-dynastic era (3,700-3,200 BC), before the age of pharaohs, among the oldest such artifacts ever found to date. 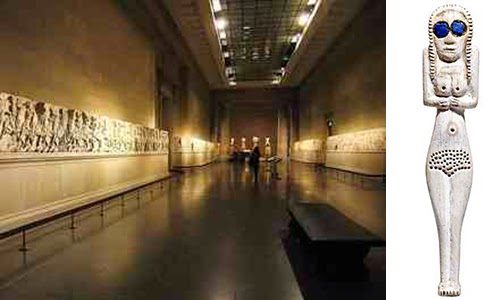 The earliest three-dimensional representations of humans from ancient Egypt, this nearly 6,000 year old example is made from bone, the large and striking blue eyes are lapis lazuli precious stones.

Faces of Ancient Egypt☥
Posted by Atlantean Gardens at 11:53 AM