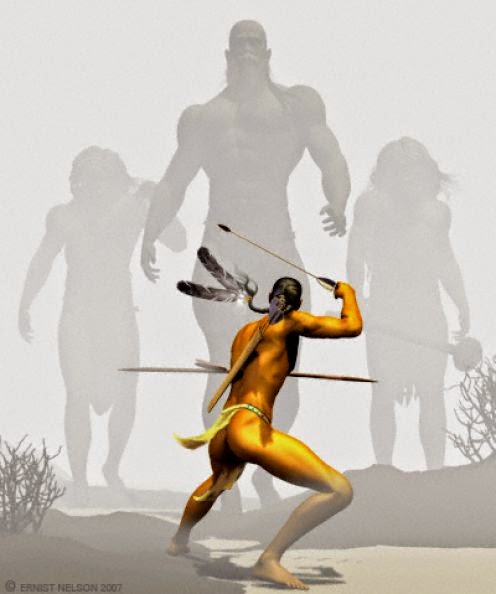 According to Paiute Indian oral legends, a tribe called the Si-Te-Cah were a native American race of tall red-haired giants that once occupied the area in the distant past.

Amazingly, 9,400 year old Mummified remains were indeed found in a cave in Nevada, though scientific study is NOT allowed on the remains for political reasons.
Sarah Winnemucca Hopkins, a prominent female Native American activist, educator, and daughter of Paiute Chief Winnemucca, related many stories passed down in her tribe, first hand, about the Si-Te-Cah in her book Life Among the Paiutes, published in 1883.

"My people say that the tribe we exterminated had red hair. I have some of their hair, handed down from father to son. I have a dress which has been in our family a great many years, trimmed with the reddish hair. I am going to wear it some time when I lecture. It is called a mourning dress, and no one has such a dress but my family."

"Native Races of the Pacific States" by Hubert Bancroft, published in 1874, Bancroft says that in Peru there were "numerous vague traditions of settlements or nations of white, bearded men, clad in long robes, who regulated the calendar, and were possessed of an advanced civilization".

A major burial site of the Nazca culture was the Chauchilla Cemetery, established in 200 AD, used for 600 to 700 years. The hair of the mummies are obviously Caucasoid and they’re all wearing long robes. The ceramic vessels were produced by the Moche culture (100 to 800 AD), they all have beards, their facial features are Caucasoid, and again, they’re all wearing long robes.

The photograph below of the village Wari mummies, one of the many pre-Inca peoples who inhabited the area now known as Lima in Peru. They were directly taken from a pyramid bearing the blue-eyed masks you see in the picture. Besides the mummy wrapped in six layers of wool, needles were found and other textile materials.

All over the New World we find legends of Quetzalcoatl (by Aztecs), Kukulkan (by Mayans), Amalivaka (by Tamanacs), Manco-Capac (by Incans), Viracocha (by Aymaras). All of them describe: a tall white man, blue eyed, with long blond-reddish hair and beard. Numerous PRE-HISPANIC Caucasian mummies have been found in South America with fair hair, some with blue stones covering the eyes, as well as gold masks with similar striking blue eyes, matching the legends of the pale-skinned Sun-gods.

Two thousand years ago a mysterious and little known civilization, with a blue-eyed elite, ruled the northern coast of Peru. Its people were called the Moche. They built huge pyramids that still dominate the surrounding countryside; some well over a hundred feet tall. The Lord of Sipán tomb is held by some archaeologists to be one of the most important archaeological discoveries in this region of the world in the last 30 years, as the main tomb was found intact and untouched by thieves.

According to the principal Inca legend, before the reign of the first Inca, the sun-god, Con-Ticci Viracocha, had taken leave of his kingdom in present day Peru and sailed off into the Pacific with all his subjects. 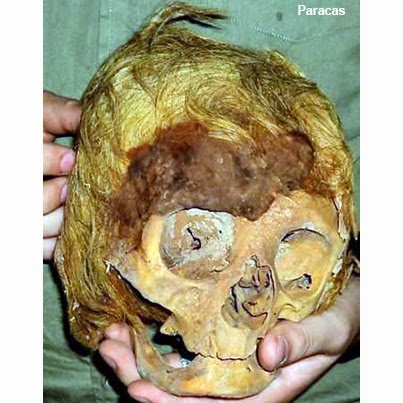 When the Spaniards came to Lake Titicaca, up in the Andes, they found the mightiest ruins in all South America - Tiahuanaco. They saw a hill reshaped by man into a stepped pyramid, classical masonry of enormous blocks, beautifully dressed and fitted together, and numerous large statues in human form.
They asked the Indians to tell them who had left these enormous ruins. The well known chronicler, Cieza de Leon, was told in reply that these things had been made long before the Incas came to power. They were made by white and bearded men like the Spaniards themselves.

The White men had finally abandoned their statues and gone with the leader, Con-Ticci Viracocha, first up to Cuzco, and then down to the Pacific. They were given the Inca name of Viracocha, or "sea foam', and vanished over the sea.
Archeologists have discovered a lost city deep within the Amazon rain forest of the long-lost tribe of white-skinned, blonde-haired people called the Cloud People. The Cloud People, also known in legend as “the white warriors of the clouds” established expansive pre-Inca kingdom located in the northern regions of the Andes in present-day Peru. Other pre-Hispanic groups referred to the Cloud People... as “White Gods” due to their height, blonde hair and blue eyes. According to Inca legend, the Chachapoyas remembered that their ancestors came from the East.

Aztec codices are books written by pre-Columbian and colonial-era Aztecs. Note that the giant pictured below has a name near him, the text reads Quinametzin, one of the old ones. 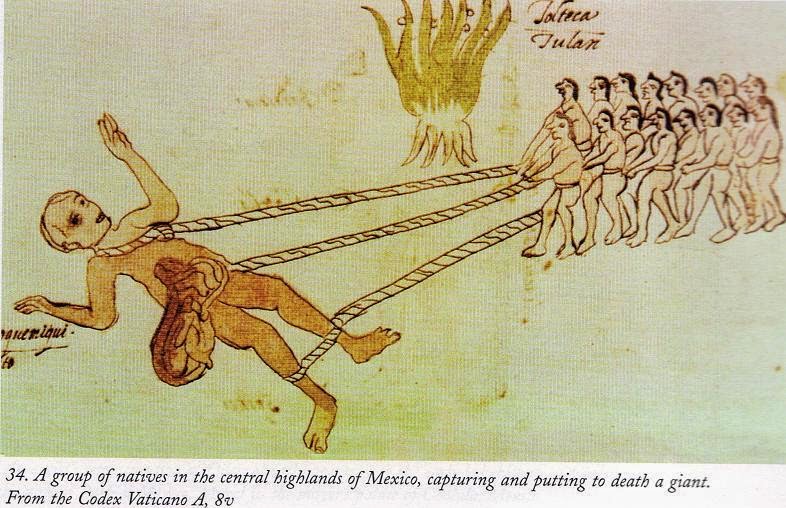