What You Were Never Told About The Great War 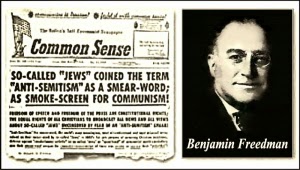 Benjamin H. Freedman was a successful Jewish businessman of New York City who was at one time the principal owner of the Woodbury Soap Company. Starting in 1945, he spent the great preponderance of his considerable fortune, at least 2.5 million dollars, exposing the tyranny which had enveloped the United States. Mr. Freedman was personally acquainted with Bernard Baruch, Woodrow Wilson, Franklin Roosevelt, John F. Kennedy, and many more movers and shakers of our times. The following shortened excerpt is from a speech given by Mr. Freedman before a packed audience at the Willard Hotel in Washington, D.C. in 1961:

“World War I broke out in the summer of 1914. Within two years Germany had won that war: not alone won it nominally, but won it actually. The German submarines, which were a surprise to the world, had swept all the convoys from the Atlantic Ocean, and Great Britain stood there without ammunition for her soldiers, stood there with one week's food supply facing her, and after that, starvation. At that time, the French army had mutinied. They lost 600,000 of the flower of French youth in the defense of Verdun on the Somme. The Russian army was defecting. They were picking up their toys and going home, they didn't want to play war anymore. And the Italian army had collapsed. Not a shot had been fired on the German soil. Not an enemy soldier had crossed the border into Germany. And yet, here was Germany offering England peace terms. They offered England a negotiated peace on what the lawyers call a status quo ante basis. That means: “Let's call the war off, and let everything be as it was before the war started.” England, in the summer of 1916 was considering that. Seriously! They had no choice. It was either accepting this negotiated peace that Germany was magnanimously offering them, or going on with the war and being totally defeated.


"While that was going on, the Zionists in Germany went to the British War Cabinet and - I am going to be brief because this is a long story, but I have all the documents to prove any statement that I make if anyone here is curious, or doesn't believe what I'm saying is at all possible - the Zionists went to the British war cabinet and they said: “Look here. You can yet win this war. You don't have to give up. You don't have to accept the negotiated peace offered to you now by Germany. You can win this war if the United States will come in as your ally.” The United States was not in the war at that time. We were fresh; we were young; we were rich; we were powerful. They [Zionists] told England: “We will guarantee to bring the United States into the war as your ally, to fight with you on your side, if you will promise us Palestine after you win the war.” In other words, they made this deal: “We will get the United States into this war as your ally. The price you must pay us is Palestine after you have won the war and defeated Germany.” Now England had as much right to promise Palestine to anybody, as the United States would have to promise Japan to Ireland for any reason whatsoever. It's absolutely absurd that Great Britain - that never had any connection or any interest or any right in what is known as Palestine - should offer it as coin of the realm to pay the Zionists for bringing the United States into the war. However, they made that promise, in October of 1916. And shortly after that the United States, which was almost totally pro-German - totally pro-German - because the newspapers here were controlled by Jews, the bankers were Jews, all the media of mass communications in this country were controlled by Jews, and they were pro-German because their people, in the majority of cases came from Germany, and they wanted to see Germany lick the Czar. At that time, everything changed, like the traffic light that changes from red to green. Where the newspapers had been all pro-German, where they'd been telling the people of the difficulties that Germany was having fighting Great Britain commercially and in other respects, all of a sudden the Germans were no good. They were villains. They were Huns. They were shooting Red Cross nurses. They were cutting off babies' hands. And they were no good. Well, shortly after that, Mr. Wilson declared war on Germany. 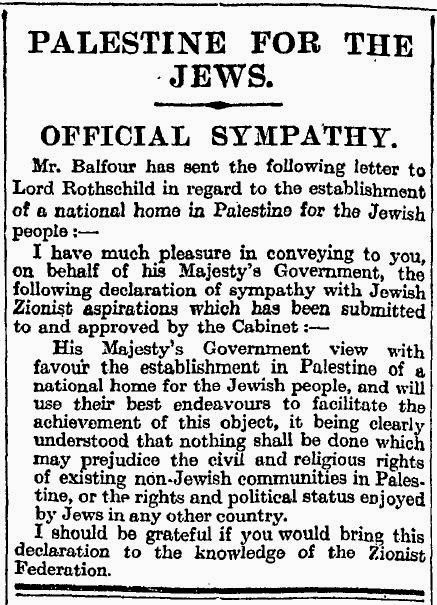 "Now, when the war was ended, and the Germans went to Paris, to the Paris Peace Conference in 1919, there were 117 Jews there, as a delegation representing the Jews, headed by Bernard Baruch. I was there: I ought to know. Now what happened? The Jews at that peace conference, when they were cutting up Germany and parceling out Europe to all these nations that claimed a right to a certain part of European territory, the Jews said, “How about Palestine for us?” And they produced, for the first time to the knowledge of the Germans, this Balfour Declaration. So the Germans, for the first time realized, “Oh, that was the game! That's why the United States came into the war.” And the Germans for the first time realized that they were defeated, they suffered this terrific reparation that was slapped onto them, because the Zionists wanted Palestine and they were determined to get it at any cost.


"When the Germans realized this, they naturally resented it. Up to that time, the Jews had never been better off in any country in the world than they had been in Germany. The Jews were doing very well in Germany. No question about that. Now, the Germans felt: “Well, that was quite a sellout.” That's how the Germans felt towards these Jews.

"We've been so nice to them"; and from 1905 on, when the first Communist revolution in Russia failed, and the Jews had to scramble out of Russia, they all went to Germany. And Germany gave them refuge. And they were treated very nicely. And here they sold Germany down the river for no reason at all other than they wanted Palestine as a so-called “Jewish commonwealth.” The Jews themselves admitted that. It wasn't that the Germans in 1919 discovered that a glass of Jewish blood tasted better than Coca-Cola or Muenschner Beer. There was no religious feeling. There was no sentiment against those people merely on account of their religious belief. It was all political. Nobody cared in Germany whether a Jew went home and pulled down the shades and said “Shema' Yisrael” or “Our Father.” No one cared in Germany any more than they do in the United States. Now this feeling that developed later in Germany was due to one thing: that the Germans held the Jews responsible for their crushing defeat, for no reason at all, because World War One was started against Germany for no reason for which they [Germans] were responsible. They were guilty of nothing. When Germany realized that the Jews were responsible for her defeat, they naturally resented it. But not a hair on the head of any Jew was harmed. Not a single hair. Now, the Jews sort of tried to keep the lid on this fact. They didn't want the world to really understand that they had sold out Germany, and that the Germans resented that.”


1666 Redemption Through Sin
Posted by Atlantean Gardens at 5:57 AM