Astro-theology and Great Cycles of Time

In 1894 the Indian astronomer, Sri Yukteswar, wrote that the cause of the precession of the equinox was the result of our sun’s orbit around another star. He estimated the orbit period at 24,000 years. This long cycle is the same concept as Plato's Great Year, as well as the Maya Long Count calendar.

The deeper occult (hidden) meaning of the pre-Christian cross, as well as it's 4 cardinal points, are of great importance in esoteric astrology and astro-theology. This understanding is the essence behind the symbol most famously referred to as the "Swastika" in Sanskrit (卐),  the symbol and its meaning pre-dates written Sanskrit itself.

Astro-theology is the study of the astronomical influence on religion. The ancient Greeks associated the Swastika with the sun god Apollo, exemplifying the symbol's historic and universal use as a solar emblem.

The Fixed Cross, consisting of the four constellations, has the same four signs regarded in the Christian belief as the four living creatures of the prophet Ezekiel. These four had the face of a man, Aquarius; the body of a lion, Leo; the horns of an ox, Taurus; and the wings of an eagle, Scorpio. The Eagle was astrologically interchangeable with Scorpio.

These same 4 fixed signs of the zodiac are symbolized in the four evangelists, and in the four beasts of Revelations.

When Moses was said to have descended from the mountain with the ten commandments (17th - 13th century BC, the end of the Age of Taurus), some of his people or followers were found by him to be worshipping a golden bull calf. He instructed these worshippers to be killed. This represents Moses "killing" the bull and ending the Age of Taurus, and ushering in the Age of Aries, which he represents when he is sometimes depicted with ram horns.

This is the same scenario when Mithras, as the solar hero/deity, ends the Taurean Age by killing the Bull, ushering in the Aryan age. This ancient ritual is still played out with bullfighting today, and the reason why the bullfighter with the red solar cape (Bulls are color blind) traditionally ends up killing the bull at the end. 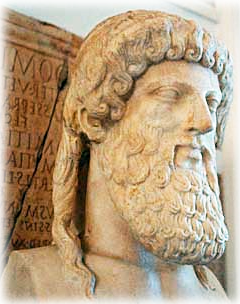 Of all the changes which take place in the heavens this reversal is the greatest and most complete ..There is at that time great destruction of animals in general, and only a small part of the human race survives." - Critias by Plato 360 B.C.E
Planet X Nibiru and the Anunnaki ♥ Species with Amnesia
Posted by Atlantean Gardens at 9:52 PM