Majestic 12 (or MJ-12) was the code name of a secret committee of scientists, military leaders, and government officials, formed in 1947 by an executive order by U.S. President Harry S. Truman.

The purpose of the committee was stated in the Wilbert Smith memo to have been to investigate the slew of reports of "flying saucer" sightings that were then being received by U.S. military intelligence and in particular to look into the possible physics and technology of propulsion of the aerial objects that were being reported. The formation of the committee is, because of the timing, widely believed to have been precipitated by the recovery of a UFO north of Roswell, New Mexico during 1947.

Indications of MJ-12's existence may have first appeared in 1978 in declassified Canadian documents naming Dr. Vannevar Bush as heading a highly secret UFO investigation group within the U.S. Research and Development Board. 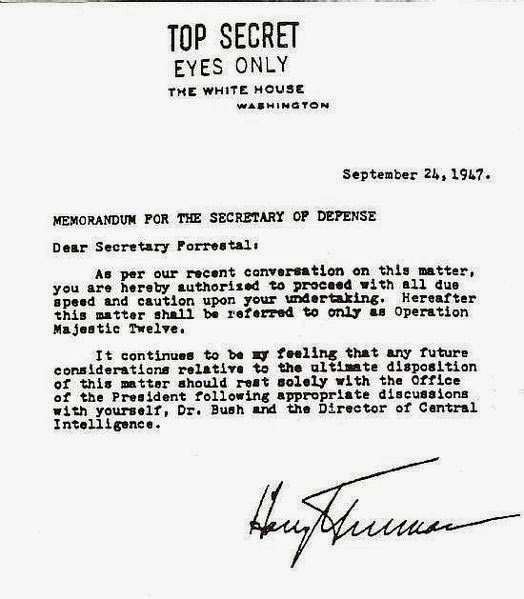 Since the first MJ-12 documents, thousands of pages of other leaked or declassified government documents mentioning MJ-12 and a government (including corporate elite) cover-up of UFOs have also appeared. All of them are controversial, and a few have been proven to be unquestionably fraudulent, usually retyped rewrites of unrelated government documents.
The most notable "new" MJ-12 document is a lengthy, Linotype-set manual allegedly dating from 1954, called the MJ-12 "Special Operations Manual (SOM)". It deals primarily with the handling of crash debris and alien bodies.
Another government group recently associated with MJ-12 was the CIA's Office of National Estimates or ONE, a forerunner of the current National Intelligence Council (NIC).

ONE was created in 1950 by CIA director Gen. Walter Bedell Smith, alleged to have replaced Secretary of Defense James Forrestal on MJ-12 after his controversial death (officially declared suicide).

All the alleged original members of MJ-12 were notable for their military, government, and/or scientific achievements, and all were deceased when the documents first surfaced (the last to die was Jerome Hunsaker, only a few months before the MJ-12 papers first appeared). 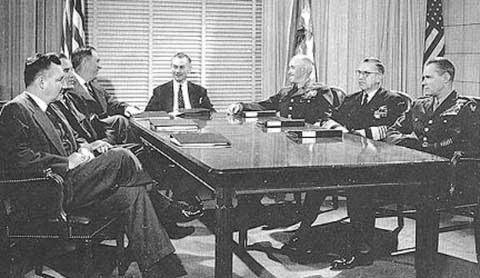 The original composition was six civilians (mostly scientists), and six high-ranking military officers, two from each major military service. Three (Souers, Vandenberg, and Hillenkoetter) had been the first three heads of central intelligence.

Researchers in the UFO community have circulated increased rumors in recent months that the meeting between Eisenhower and people from another planet took place in the early 1950's. Eisenhower, who was president from 1953 to 1961, is known to have had a strong belief in life on other planets.
The former five-star general in the United States Army who commanded the Allied Forces in Europe during the Second World War, was also keen on pushing the U.S. space program. His meeting with the cosmic life forms is said to have taken place while officials were told that he was on vacation in Palm Springs, California, in February 1954.
The initial meeting is supposed to have taken place with aliens who were 'Nordic' in appearance, but the agreement was eventually 'signed' with a race called 'Alien Greys'. 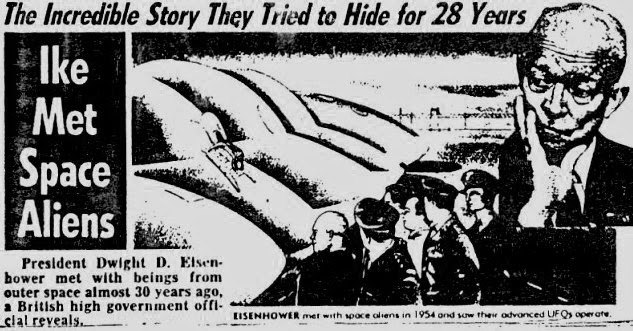 Posted by Atlantean Gardens at 7:49 PM