The Caucasian dolmens represent a unique type of prehistoric architecture, built with precisely dressed large stone blocks. The stones were, shaped into 90-degree angles, to be used as corners or were curved to make a circle. The monuments date between the end of the 4th millennium and the beginning of the 2nd millennium B.C. They are situated in the foothills (about 250-400 meters above the sea level) along the coast of the Black Sea. This chain is the biggest conglomeration of dolmens in Europe.

Approximately 3,000 of these megalithic monuments are known in the North-Western Caucasus, but more are constantly being found, while more and more are also being destroyed. Today, many are in great disrepair and will be lost if they are not protected from vandals and general neglect.

All of the dolmens are punctuated with a portal in the center. Some are made of more than one stone, and others carved through a single stone. While round portholes are the most common, square ones are also found. Related to these are the stone plugs, which were used to block the porthole, and are found with almost every tomb. Sometimes phallic-shaped, the entrance of a Caucasian dolmen is always at the south-side (as with the Dutch Hunebeds). 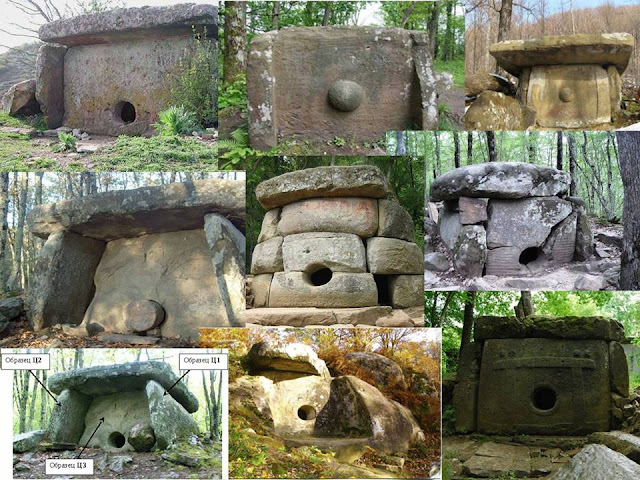 ‘Caucasus Mountain legend says that once upon a time there were giants in the Caucasus. they were kind and strong creatures, and as it often happens, there were small and spiteful people near them. they were sharp, cunning, whining and artful people who were driven away by their former neighbours for their meanness and treachery. the giants gave refuge and a part of their lands to them. They were so kind that they made stone houses for their guests and they carried them on their shoulders to the most beautiful and dry places, to the banks of rivers and lakes. Instead of doors they breached round holes through which little people went hunting on lop-eared hares. However the giants were repaid for their kindness. In order to tame the giants the little people blinded them and began to give them different herbs and because of it, the giants began to lose their minds and conflict with each other. Once the giants freed themselves from charms a war began, resulting in everyone’s death with just the stone houses remaining’.
READ: Species with Amnesia: Our Forgotten History﻿

Posted by Atlantean Gardens at 2:44 PM