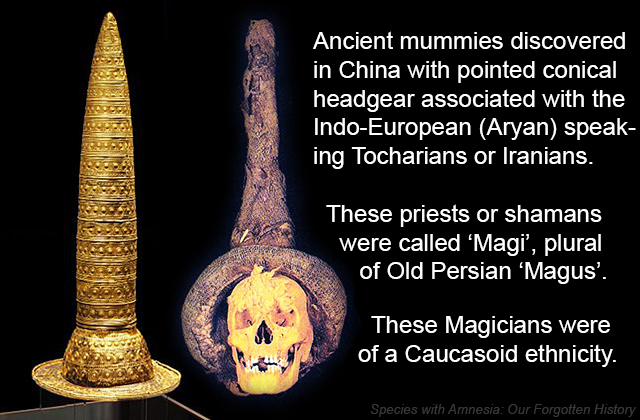 Have you ever wondered why pointed hats (often decorated with lunar, stellar and solar symbols) were associated with witches? It turns out that this type of headgear truly was worn by "witches" - or more likely priestesses/priests or shamans amongst various Aryan peoples. At Subeshi in China, the mummies of Europoid women have been discovered with this kind of head gear which scholars associate with the Indo-European speaking Tocharians or Iranians. [See The Tarim Mummies by J.P. Mallory and Victor H. Mair] 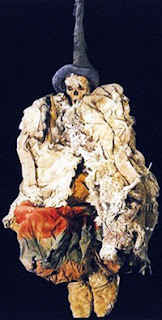 There is strong linguistic evidence to support the idea that Aryan priests and fortune tellers were present in the Shang and Zhou dynasty courts, probably in service to blonde haired Aryan emperors (Yellow Emperors) who ruled as the first emperors of China, over a subjugated mongoloid population.

These ancient astronomers and priests were called Magi, the plural of the Old Persian Magus. Archaeological and genetic evidence indicates that these Magi were of a Caucasoid ethnicity. Their conical headgear has also been associated with the Aryan steppe tribes. Theirs was a fire cult and they served a sky god.

A recently broadcast television documentary [Museum Secrets] brought to my attention the discovery of ancient gold hats, one of which is on display in the Neues Museum in Berlin. Three others are in existence and all were found in Germany and France, indicating the existence of a Bronze Age solar cult in central Europe. So it would appear that the image of the pointed hat wearing witch or warlock is not as far fetched as it once seemed!

Species with Amnesia: Our Forgotten History
﻿

Robert Sepehr is an author, producer, and independent anthropologist.