The swastika (卐) was used as the cross of the Manicheans, a religious movement started in the latter half of the third century. that was founded by the Iranian prophet Mani in the Sasanian Empire. Manichaeism taught an elaborate dualistic cosmology describing the struggle between a good, spiritual world of light, and an evil, material world of darkness. Its beliefs were based on Mesopotamian religious philosophy, Buddhism, Tantra, and Christian Gnosticism.

Catharism  was a christian Gnostic movement that thrived in some areas of Southern Europe, particularly what is now northern Italy and southern France, between the 12th and 14th centuries. Followers were known as Cathars, and their beliefs were said to have been brought from Persia, influenced by concepts rooted in the Manichean philosophy. 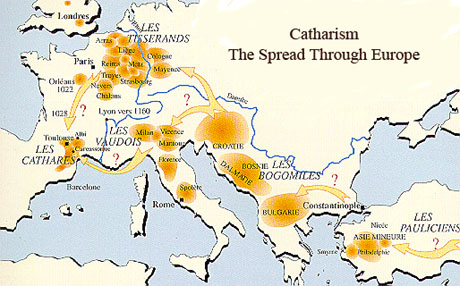 Robert Sepehr is an author, producer and independent anthropologist.
http://amazon.com/Robert-Sepehr/e/B00XTAB1YC/